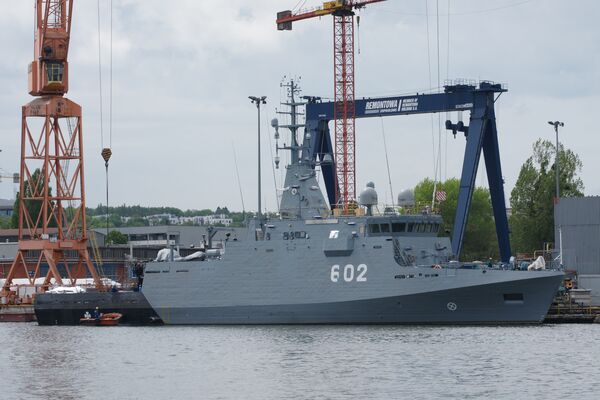 In a twitter post on 15 March, Polish Defence Minister Mariusz Błaszczak said an agreement for the new vessels would be concluded by June at the latest. “This will allow us to maintain competence and maintain continuity of production in Polish shipyards,” he added.

The new vessels will supplement the three Kormoran II MCMVs on order for the Polish Navy under contracts awarded to a consortium comprising Remontowa Shipbuilding (acting as the prime contractor), Gdynia naval shipyard, OBR CTM, and the CTO ship design and research centre.

The first MCMV, ORP Kormoran (601), entered service in November 2017, and is based with the 8th Coastal Defence Flotilla's 13th Minesweeper Squadron. The second and third ships, ORP Albatros (602) and ORP Mewa (603), were launched in October 2019 and December 2020, respectively. The two vessels were scheduled for delivery in 2020 but, following delays announced in 2021, are now expected to be delivered in 2022-23.

The non-magnetic steel hull Kormoran II class is designed for minehunting in Poland's exclusive economic zone (EEZ), with task forces in the Baltic and North seas. The vessels are intended to replace the navy's 1960s-era Project 206FM mine warfare vessels ORP Czajka, ORP Flaming, and ORP Mewa, which were decommissioned between 2019 and 2021.

The Kormoran IIs have a full load displacement of 850 tonnes, an overall length of 58.5 m, and can carry a crew complement of 45, with accommodation for seven additional personnel.