Israel’s Plasan has developed a new version of its 4×4 SandCat light armoured vehicle (LAV) called the StormRider with a gross vehicle weight (GVW) of up to 11.5 tonnes.

The company had earlier planned to launch the new vehicle at Eurosatory 2020 in April.

Developed in the early 2000s and unveiled in 2005, the SandCat LAV is based on a shortened Ford F-350 chassis. The vehicle received several upgrades since its introduction although its original structural configuration – comprising a separate chassis that supports a protected cabin – was retained. 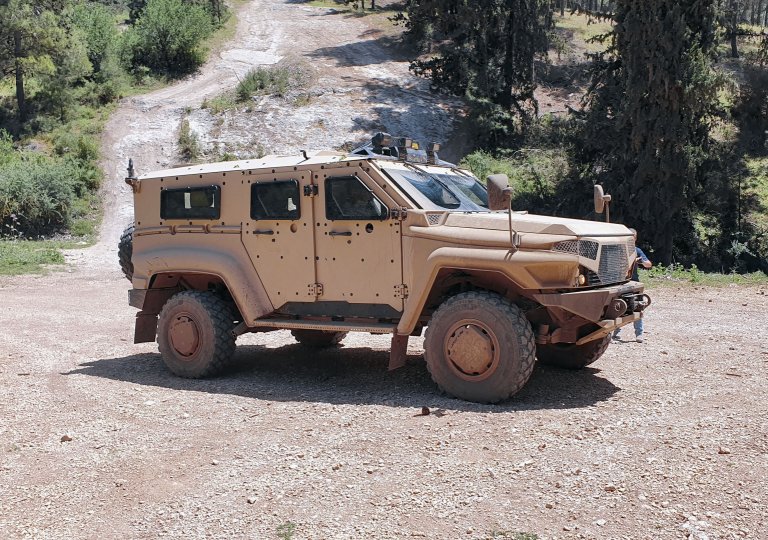 The StormRider, however, features a monocoque hull that is fitted with an independent suspension system comprising coil springs over shock absorbers. It is 6.03 m long, 2.53 m wide, and 2.62 m tall, with a track and wheelbase of 2.13 m and 3.68 m, respectively.

is powered by a Ford 6.7-litre V8 OHV Power Stroke turbodiesel engine rated at 330 hp and this is coupled to a TorqShift 10-speed automatic transmission.

The vehicle has a stated maximum road speed of 105 km/h and is fitted with an electronically operated two-speed transfer case that complements the 10-speed gearbox, enabling the engine to generate 1,010 Nm of torque at 2,000 rpm and a power-to-weight ratio exceeding 30 hp/tonne.

Several other mobility enhancements have also been incorporated, including an increased fuel capacity of from 150 to 200 litres, and larger 365/80 R20 tyres as opposed to the 285/70 R19.5 used on earlier SandCat models.