PLANMC may be re-equipping for combined arms, multidomain operations

As part of this, the corps may also be operating the China North Industries Group Corporation (Norinco) ZTQ-15 (also known as Type 15) lightweight battle tank, several examples of which were shown by the broadcaster being inspected by members of a PLANMC brigade at an undisclosed base. In this context CCTV stated that an infantry battalion had been re-equipped as a combined arms battalion. 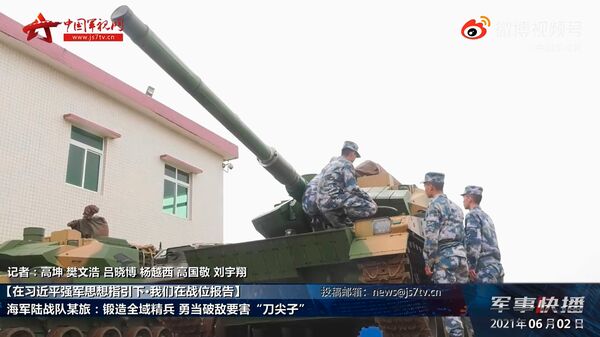 The CCTV report was about how the corps is being modernised to fulfil its expanding role – from an amphibious to a combined arms, multidomain combat force – as part of a reorganisation drive that began in 2017.

More specifically, CCTV noted that the corps has moved beyond conducting a single “pure mission”, i.e. amphibious assaults, and is now moving towards the ability to conduct multiple overseas operations.

As evidence of this, the report referred to recent exercises conducted in “high-altitude” areas: language typically used to refer to Tibet or Xinjiang. The corps has also conducted training exercises to co-ordinate the effects of battle tanks with those of long-range artillery assets: a ubiquitous capability practised by most PLA Ground Force (PLAGF) units.

A report by state broadcaster China Central Television (CCTV) on 2 June suggests that the People's L...

China is continuing to modernise the equipment and enhance the combat capabilities of the People’s L...