Released by state broadcaster China Central Television (CCTV) on 27 May, the footage shows at least two aircraft of the type taking off from the base and conducting training exercises, including in-flight refuelling, before landing at the same base, which is part of the PLA's Southern Theatre Command. 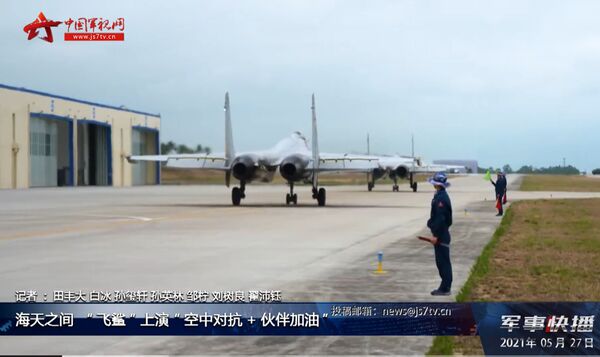 A screengrab from footage released by CCTV on 27 May showing two PLANAF J-15 multirole fighters about to take off from Lingshui Airbase on Hainan Island in the South China Sea. (CCTV)

This marks the first time the multirole, carrier-borne J-15, which is manufactured by the Shenyang Aircraft Corporation (SAC), has been seen operating from this base, which has been home to the PLAN's 3rd Air Division since 2018–19.

The latest developments come after commercial satellite imagery captured on 27 January showed that China had placed a mock carrier landing strip at the base. The landing strip, placed on the southeastern end of the runway, provides a place for pilots to practise carrier approaches and landings while operating from shore.

The carrier landing strip, which was painted between November 2020 and January this year, measures approximately 206 × 26 m. The location of helicopter landing and tie-down markings, as well as the marking of arrestor wire positions, are identical to those found on Shandong (CV 17) – the PLAN's second aircraft carrier – as are the relevant dimensions involved.