Footage released on 23 April by China Central Television’s (CCTV’s) ‘Military Report’ programme shows at least six examples of the SPH, which is based on a modified Dongfeng Mengshi 6×6 CTL181A, being deployed by a light combined arms brigade within the PLAGF’s 72nd Group Army at an undisclosed location in China. 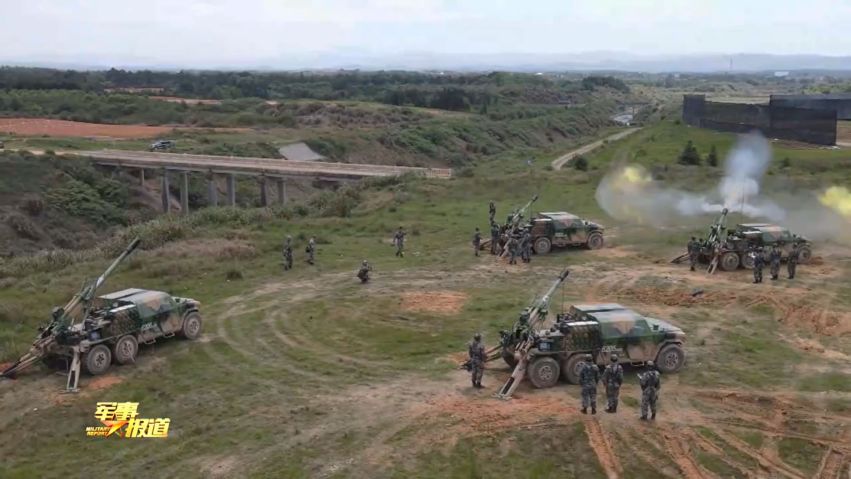 A screengrab from footage released by CCTV on 23 April showing several examples of the PLAGF’s new 122 mm 6×6 SPH during a recent live-fire exercise. (CCTV)

The description provided in the CCTV report makes it clear that the SPH has an automated fire-control system with automatic gun-laying, allowing all SPHs linked to the command vehicle to press a single button to automatically lay their gun onto the target. This functionality makes the system much quicker than towed howitzers, which used manual gun-laying.

The broadcaster also showed the SPHs operating in conjunction with Dongfeng Mengshi CSK181 4×4 armoured vehicles, in at least two variants. The first variant mounted communications equipment and appeared to be configured as command vehicles, controlling a battery of at least six SPHs. The second variant was configured as a counter-battery radar. It was fitted with a radar antenna and an opto-electronic sight mounted on top of a folding and elevating mast.

The new SPH is believed to have been handed over to the brigade during the second half of 2020.