Chinese state-owned television revealed on 27 September that since early 2020 the People’s Liberation Army Ground Force (PLAGF) has been deploying a new surface-to-air missile (SAM) with at least some of its HQ-17A road-mobile short-range air-defence (SHORAD) systems. 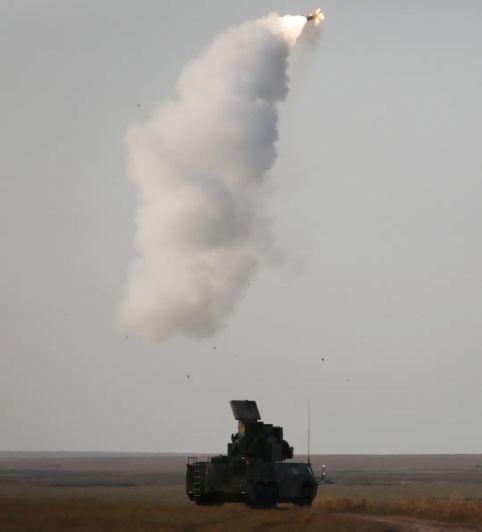 A PLAGF HQ-17A 6×6 SHORAD system firing what appears to be a new SAM that has reportedly been in service since early 2020. (CCTV)

Weihutang, a programme on military affairs from state broadcaster China Central Television (CCTV), released footage on 27 September showing the new air-defence missile being fired from an HQ-17A – a wheeled variant of the tracked HQ-17 system – during an exercise conducted in the Horqin Prairie of China’s Inner Mongolia Autonomous Region.

Weihutang said the HQ-17A that fired the missile is operated by an air-defence battalion within a combined arms brigade of the PLAGF’s 78th Group Army but gave no details about the capabilities of the new weapon. Moreover, no close-up images of the missile were provided.

That said, the soldiers operating the HQ-17As shown in the footage were seen wearing a new type of camouflage uniform: a development that is in line with an announcement made by China’s Ministry of National Defence (MND) on 31 October 2019.

The HQ-17A system is mounted on a 6×6 truck chassis by the DongFeng Motor Corporation that is based on the Belarusian MZKT-6922 chassis. The export version of the system, called the FM-2000, had been unveiled by the China Aerospace Science and Industry Corporation (CASIC) during the Airshow China 2018 defence exhibition in Zhuhai.

The HQ-17A appears to be a more modern version of the Russian-made 9K330 Tor-M1/M2 SHORAD systems. For instance, the Chinese system features a different antenna array for its fire-control and surveillance radars.

Chinese state-owned television revealed on 27 September that since early 2020 the People’s Liberatio...