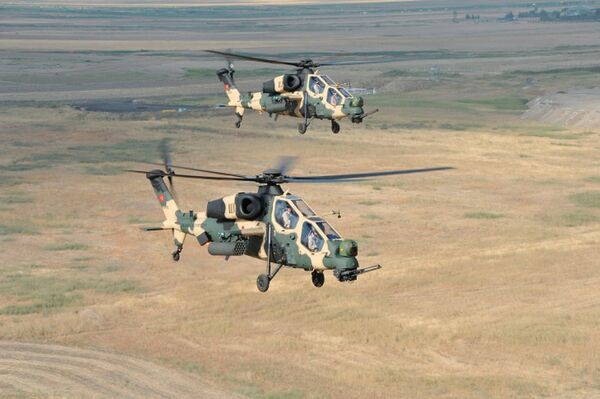 The Philippines has taken delivery of the first two of six TAI T129B attack helicopters (examples of which are pictured above). (Turkish Aerospace Industries)

The PAF said in a 9 March statement on its Facebook page that the units arrived at Clark Air Base in Mabalacat City, Pampanga, aboard two Airbus A400M transport aircraft from Turkey.

Lieutenant Colonel Maynard Mariano, PAF spokesperson, told the state-owned Philippine News Agency (PNA) that one of the A400Ms carried the two helicopters, while the second carried logistical and support equipment for the two platforms.

Lt Col Mariano told Janes that the PAF expects to induct the helicopters soon. “The T-129 will have to undergo the mandatory acceptance procedures, this will include, but not limited to, systems checks and test flights. It may take two weeks at the least for this to be accomplished, but we cannot yet determine as to the exact time and date of the acceptance ceremony,” he said.

He added that the aircraft will have to undergo orientation in the country, with pilots and the crew.

The order for the six T129Bs was announced in May 2021. The Philippine Secretary of National Defense Delfin Lorenzana stated at the time that deliveries would occur in the third quarter of that year.

Lt Colonel Mariano said that delays were incurred after the programme ran into several challenges, including the Covid-19 pandemic.

“Foremost of which is our global situation on the pandemic. Just like the other programmes of the AFP, the T-129 was not spared with these delays,” he said.