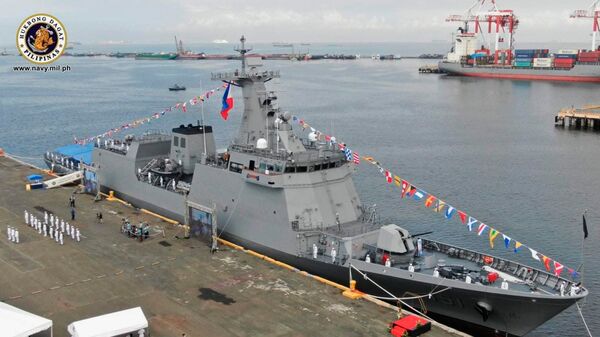 BRP Antonio Luna , the PN's second Jose Rizal-class guided-missile frigate, during its commissioning ceremony on 19 March at South Harbor in Manila. Philippine media reported on 11 October that the Mistral 3 SAMs meant to arm the two frigates have been delivered to the PN. (Philippine Navy)

The state-owned Philippine News Agency (PNA) quoted Colonel Ramon Zagala, a spokesperson for the Armed Forces of the Philippines (AFP), as saying that “the Mistral 3 SAMs will be fitted on BRP Jose Rizal (FF 150) and BRP Antonio Luna (FF 151) and will give the Philippine Navy a much needed defensive capability against hostile air targets”.

This missile system is a “cost-effective and a reliable addition to a layered defence system”, he noted, while the PNA pointed out that the procurement of the Mistral 3s is part of the PN's Frigate Acquisition Project Lot 2B.

The infrared-homing Mistral 3 is the latest version of the SAM and has a range of 7 km.

The frigates' anti-surface missiles are set to be delivered in March 2022. Janes understands that both warships will be armed with SSM-700K Haeseong (C-Star) sea-skimming anti-ship missiles from South Korean defence manufacturer LIG Nex1.

The latest developments come after the Philippine Department of National Defense (DND) disclosed on 10 August that it had selected suppliers for the frigates' torpedo and countermeasures systems.

Philippine media reported on 11 October that the Philippine Navy (PN) has received an undisclosed nu...