Philippine Secretary of National Defense Delfin Lorenzana revealed on 24 May that Manila has ordered six Turkish Aerospace (TA) T129B ATAK helicopters for the Philippine Air Force (PAF), with deliveries expected to begin in the third quarter of this year, according to the state-owned Philippine News Agency (PNA). 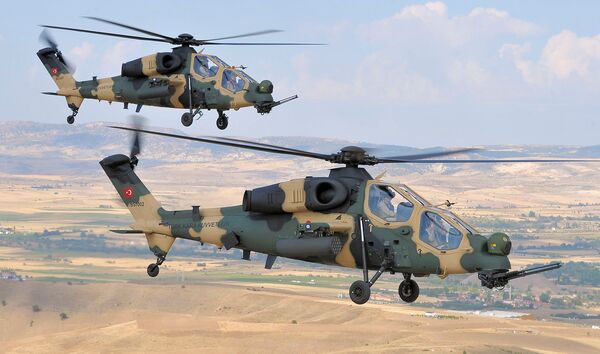 Philippine Defence Secretary Delfin Lorenzana announced on 24 May that the PAF is expecting deliveries of six T-129 ATAK helicopters (similar to these ones in Turkish service) to begin in the third quarter of this year. (Turkish Aerospace )

The agency also quoted Lorenzana as saying that Manila has earmarked about PHP13.8 billion (USD286.6 million) for the attack helicopter programme, adding that the new multirole, twin-engined, tandem-seat platforms are expected to enhance the rotary-wing combat capabilities of the PAF, which currently fields MD 520MG and AW109E Power light attack helicopters in the counter-insurgency and ground support roles.

Janes understands that the programme budget figure announced by Lorenzana would be sufficientto acquire at least six T129B helicopters along with related equipment, spares, support, and training.

Lorenzana's remarks came after the PAF announced on 22 May that it was sending pilots and maintenance crews from its ‘15 Strike Wing' to Turkey to undergo T129B training at TA's facilities in Ankara between late May and August.

No further details were provided but the announcement was made after Serdar Demir, TA's director of marketing and communications, said on 18 May that the US State Department had recently approved the export licence for the US-made LHTEC CTS800-4A engines that power the helicopter. This came after TA general manager Temel Kotil told the CNN Türk news channel in April that production of the PAF helicopters would begin “in the coming months”.

Philippine Secretary of National Defense Delfin Lorenzana revealed on 24 May that Manila has ordered...