The aircraft were commissioned in a turnover and blessing ceremony held on 13 October at Clark Air Base in Angeles City, Pampanga Province, that was presided over by Defence Secretary Delfin Lorenzana. 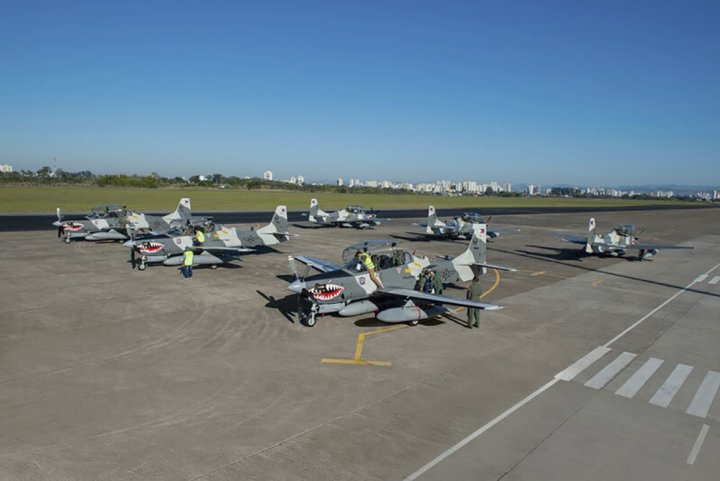 The PAF’s six A-29B Super Tucanos at Clark Air Base. These aircraft were officially inducted in a ceremony held on 13 October.

In a speech to mark the event the secretary said he was open to acquiring six more A-29Bs. “I was discussing with the Commanding General [PAF chief Lieutenant General Allen Paredes] a while ago [that] having six Super Tucanos is good but another six more would be better,” Lorenzana was quoted by the state-owned Philippine News Agency (PNA) as saying.

The first four of the recently commissioned A-29Bs had arrived at the base on 19 September, with the remaining two arriving on 2 October after being flown by Embraer pilots from Sao Paulo in Brazil, and making refuelling stops in the Canary Islands, Portugal, Malta, Egypt, Bangladesh, the United Arab Emirates, India, Thailand, and Vietnam.

The platforms were initially scheduled to be handed over by the end of February but the delivery was delayed due to the Covid-19 pandemic.

Embraer will now train selected PAF pilots for two months as part of its agreement with the air force.

The A-29s, which are now part of the PAF’s 15th Strike Wing, will supplement the service’s Boeing (Rockwell) OV-10 Bronco ground-attack aircraft. The aircraft are expected to be employed in several roles, including close air support, light attack, surveillance and reconnaissance, air-to-air interception, and counter-insurgency.