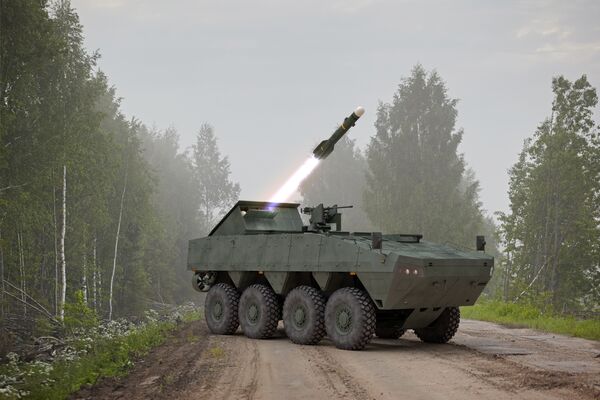 Artist's impression of the Rosomak 8×8 armoured vehicle fitted with a retractable Brimstone launcher presented by MBDA at MSPO 2020. (MBDA)

Polska Grupa Zbrojeniowa (PGZ) and MBDA UK announced in a press release on 16 May that they had signed an agreement to co-operate on the design and production of tank destroyers armed with Brimstone anti-tank guided missiles (ATGMs).

Under the agreement, which follows on from one signed in 2019 on co-operation between the two companies, PGZ and MBDA will integrate Brimstone into a Polish tank destroyer squadron module.

The new agreement also covers foreign markets as well as foreseeing Brimstone production in PGZ facilities. PGZ CEO Sebastian Chwałek said, “As a result of Polish-British co-operation, a joint offer will be made to the Polish Armed Forces and allied forces; our companies will also enter supply chains.”

MBDA UK managing director Chris Allam added, “By deepening our co-operation around Brimstone, we will jointly support the development of Poland's military and industrial capabilities and enhance the strategic ambition of our companies.”

Under the Ottokar-Brzoza programme, the Polish Armed Forces will acquire a battery module of self-propelled tank destroyers armed with ATGMs, plus command and support vehicles. The PGZ-Ottokar consortium is responsible for the development, production, and delivery of tank destroyers, a new product in consortium leader PGZ's product portfolio. PGZ told Janes

Polska Grupa Zbrojeniowa (PGZ) and MBDA UK announced in a press release on 16 May that they had sign...