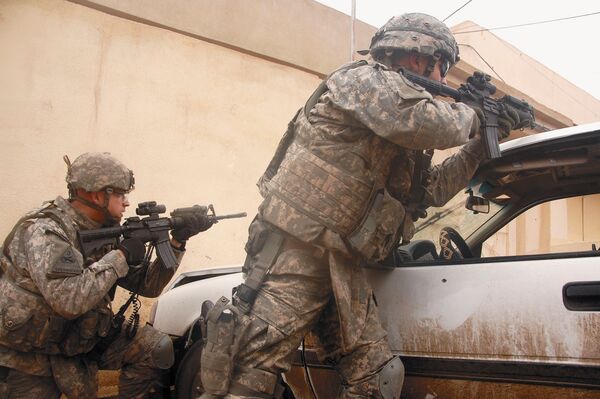 US Army soldiers engage in a firefight in Mosul, Iraq. (US Department of Defense)

The US Department of Defense (DoD) plans to reduce its military end strength by 4,647 people or 0.2%, leaving a total force of more than 2.1 million, according to the DoD's fiscal year (FY) 2023 budget request.

“Overall, you're seeing a very flat picture,” Pentagon comptroller Michael McCord said at a 28 March press briefing. The budget increase that the DoD is seeking in FY 2023 “is not about making the force bigger. We're looking at making the force more capable.”

The active-duty army would bear the majority of the end strength cut, shrinking by 3,000 soldiers to 473,000 and causing the total army force to fall slightly below the 1 million mark to 998,500. The army reserve and national guard would be unchanged.

The active-duty and reserve navy would lose a combined 2,135 sailors partly due to early ship retirements, leaving a total navy force of 404,000. The marine corps would lose 249 active-duty personnel but gain 643 in its reserve, yielding a net increase of 394 to 210,000.

The air force reserve would lose 300 airmen, more than offsetting increases of 95 in the active-duty air force and 100 in the air national guard, while the space force would gain 199 guardians. The air and space forces would have a combined end strength of 510,400, up 94 from FY 2022.