Canada’s Viking has debuted its new intelligence, surveillance, and reconnaissance aircraft, the Guardian 400, at the Paris Air Show.

The aircraft is based on the Twin Otter, and has been developed in association with Austrian company Airborne Technologies. 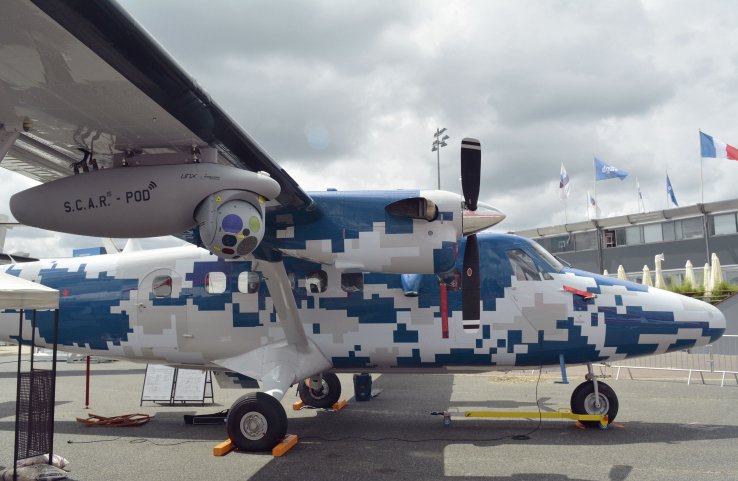 The aircraft shown at Le Bourget featured one wing-mounted SCAR 15 pod, equipped with a Hensoldt ARGOS II electro-optical infrared (EO/IR) camera. Future development of the suite for the aircraft will include the mounting of a second SCAR pod fitted with a Leonardo Osprey radar system that can give the aircraft 120° of radar coverage, combined with a visual detection and ranging (ViDAR) system provided by Sentient. Additional radar coverage can be gained by mounting further antennas on the aircraft, however, this will be less modular and add weight to the aircraft.

Further developments under way include the integration of the Artemis cellular geolocation system from UK company Smith Myers, which will allow for finding and tracking mobile telephones on the ground.

Data and imagery can be downlinked to users on the ground through a system developed by UK company ECS, at a range of 12–20 km for a tablet, or up to 200 km for fixed headquarters or larger vehicle mounts.

A roll-on/roll-off tactical workstation system can be installed inside the aircraft. Other additional configuration options include a stretcher, camera hatch, and enlarged lavatory facilities.