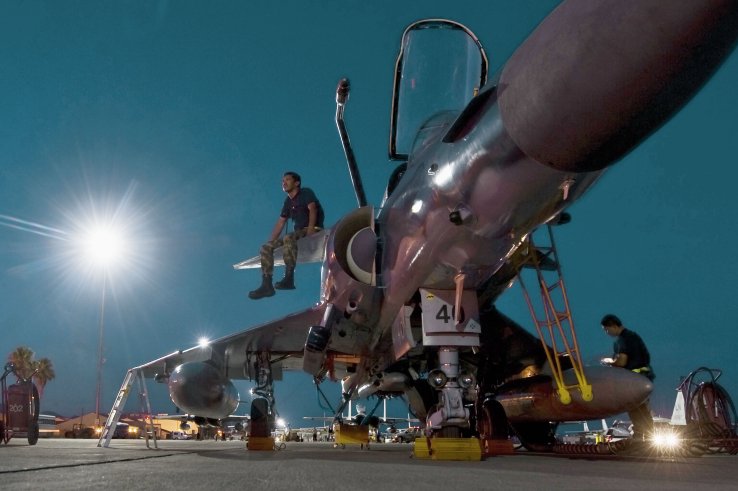 A Colombian air force technician sits on the canard of a Kfir during a ‘Red Flag’ exercise in 2012. IAI hopes to sell the enhanced Kfir NG to Colombia, and expects to return to service aircraft for Sri Lanka and Ecuador. (US Air Force)

Speaking to Jane’s at the Paris Air Show, Yossi Melamed, head of IAI’s Aviation Group, said that with the Colombian Air Force (Fuerza Aerea Colombiana: FAC) being “very happy with the performance” of the 22 Kfirs that IAI had previously upgraded for the service, the company is developing a further enhanced Kfir NG that it sees as a perfect fit for a follow-on replacement.

“I think the Kfir NG offers a huge advantage for Colombia,” Melamed said. “There is no argument about the current capability of the Kfir, and the Kfir NG would provide a meaningful change. Colombia already has the infrastructure, training, simulators, and even ammunition for the aircraft so why would they want to spend two billion dollars on another aircraft?”

With the current Kfir Block 60 that the FAC operates featuring a ‘zero-timed’ airframe, system, sensor, avionics (comparable with the F-16 Block 52), and weapon enhancements, the Kfir NG adds a more powerful General Electric (GE) F414 engine (as already powers the Boeing F/A-18E/F Super Hornet and Saab Gripen E/F) in place of the outdated GE J79; an enhanced active electronically scanned array (AESA) radar; improvements to the datalinks; and upgraded avionics. Another feature that is still in development is a redesigned aft-fuselage that will increase the aircraft fuel capacity. According to Melamed, this should double the Kfir’s endurance.

The three nations so far signed up to partner on the Future Combat Air System Technology Initiative ...
Request Consultation
Thank you for your inquiry, a Janes representative will be in contact with you shortly.