Islamabad has rejected accusations levelled by a senior Afghan government official that the Pakistan Air Force (PAF) has been “providing close air support to the Taliban in certain areas” after the group captured a key border crossing between Pakistan and Afghanistan.

Afghan First Vice President Amrullah Saleh tweeted on 15 July that the PAF had issued “an official warning” to both the Afghan army and air force that “any move to dislodge the Taliban” from the Spin Boldak-Chaman crossing would be “faced and repelled by the Pakistan Air Force”, adding that Afghan aircraft as far as 10 km from Spin Boldak were warned to “back off or face air-to-air missiles”.

Afghan media outlet TOLOnews reported that this happened as three Afghan Air Force (AAF) A-29 Super Tucano light attack aircraft were about to strike targets near the border area, adding that the AAF mission was aborted as a result of the warning. The southern border crossing is one of several captured by the Taliban in recent weeks, including in northern and western Afghanistan. 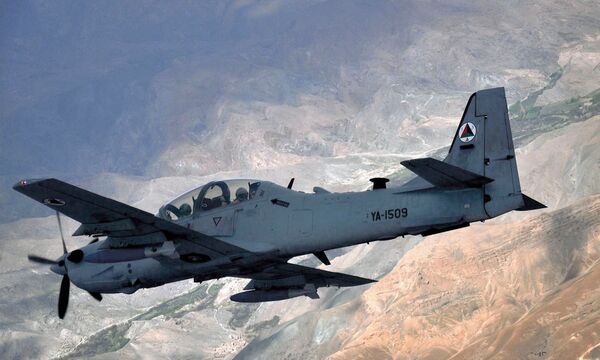 Afghan media reported in mid-July that the PAF issued a warning to the AAF as three A-29 Super Tucano night attack aircraft (similar to this one) were about to strike targets in Afghanistan near the Spin Boldak-Chaman border crossing: a claim Islamabad has denied. (US Air Force 438th Air Expeditionary Wing)

However, the Ministry of Foreign Affairs (MoFA) in Islamabad rejected the accusations in a statement issued the following day. “We acknowledge [the] Afghan government's right to undertake actions on its sovereign territory. However, ... [the] Pakistan Air Force never communicated anything to the AAF [as alleged by the Afghan vice president]. Such statements undermine Pakistan's sincere efforts to play its part in an Afghan-owned and Afghan-led solution, said the MoFA.

Islamabad has rejected accusations levelled by a senior Afghan government official that the Pakistan...

Taliban offensive sends significant warning to the Afghan and US governments

Throughout the seven months that followed the US/Taliban peace deal of 29 February, there have been ...

Moscow opposes establishment of US military bases in Central Asia

As US and coalition forces withdraw from Afghanistan, the Taliban and Al Qaeda remain “closely align...
Request Consultation