The Pakistan Navy (PN) has commissioned the second of two Yarmook-class multirole corvettes ordered from Dutch shipbuilder Damen in 2017. 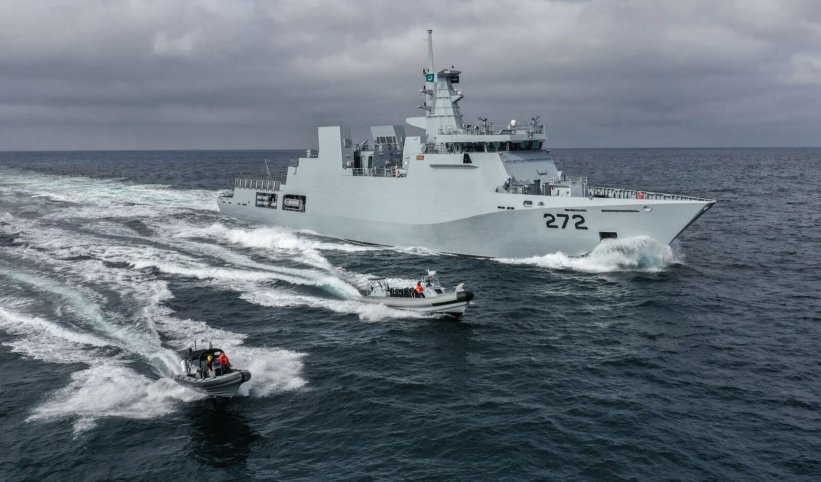 The Pakistan Navy commissioned PNS Tabuk, its second and final Yarmook-class corvette, in a ceremony held on 12 November at the Port of Constanta in Romania. Constructed by Dutch shipbuilder Damen, the vessel is seen here during sea trials. (Damen)

Named PNS Tabuk (pennant number 272), the 91.3 metre-long ship, which the company says is based on a Damen Offshore Patrol Vessel (OPV) 1900, entered service in a ceremony held on 12 November at the Port of Constanta in Romania.

Launched in September 2019, the 2,300-tonne vessel was built at Damen’s facilities in Galati, Romania, just as first-of-class PNS Yarmook (271), which entered PN service in February this year.

The Yarmook class, which has an overall beam of 14.4 m and a hull draught of 4 m, is stated to be capable of performing “a variety of maritime operations in complex environments”. The ships can embark a medium helicopter and an unmanned aerial vehicle, carry two high-speed rigid-hulled inflatable boats – of 11.5 m and 6.5 m in length – and transport two twenty-foot equivalent units (TEUs) for special operations.

Each corvette is equipped with “state-of-the-art electronic warfare, anti-ship and anti-air weapons and sensors along with modern self-protection and terminal defence systems”, according to the PN.

Janes understand that the class, which has a crew complement of 138, has been designed to accommodate a 30 mm gun system in the ‘A’ position, several 12.7 mm machine guns, and the MR-36A I-band surface search radar. However, no further details have been provided about the other weapons and systems used by the class.