The Pakistan Army (PA) officially inducted into service its first batch of Al-Khalid-I main battle tanks (MBTs) in a ceremony held on 28 July at the facilities of state-owned defence manufacturer Heavy Industries Taxila (HIT) in the Rawalpindi District of the Pakistan’s Punjab Province.

In a statement issued that same day, Inter-Services Public Relations (ISPR), the media wing of the Pakistani military, said that several units of the tank, which is an improved variant of the in-service Al-Khalid MBT, were handed over to the PA’s Armoured Corps. The video shows at least 20 Al-Khalid-Is lined up at the ceremony. 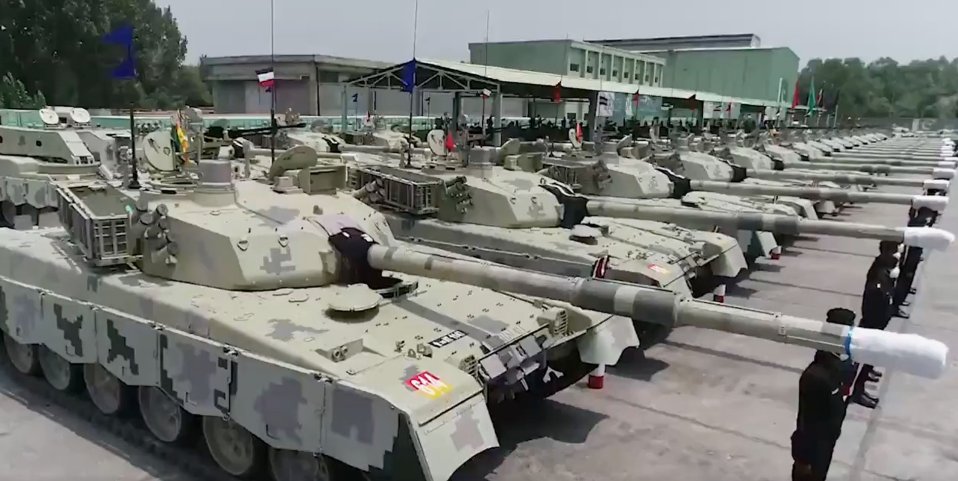 A screengrab from video footage provided by ISPR of the handover ceremony of the first batch of Al-Khalid-I MBTs to the PA on 28 July. (ISPR)

During the ceremony, which was also attended by Pakistan’s chief of army staff, General Qamar Javed Bajwa, the platform displayed some of its capabilities, including “mobility, speed, bi-axis gun stabilisation of the control system, and use of smoke screen to mask movement”, said ISPR, adding that the new tanks will be handed over to formations that have a “critical and decisive role during war”.

The Al-Khalid-I is part of a joint venture between Pakistan, China, and Ukraine, and is believed to be intended to replace approximately 300 Type 85 and 320 T-80UD MBTs. Compared with the Al-Khalid, the first units of which entered service in 2001, the upgrade is comprehensive and appears to be angled at making the design competitive with the Indian Army’s fleet of T-90S MBTs.