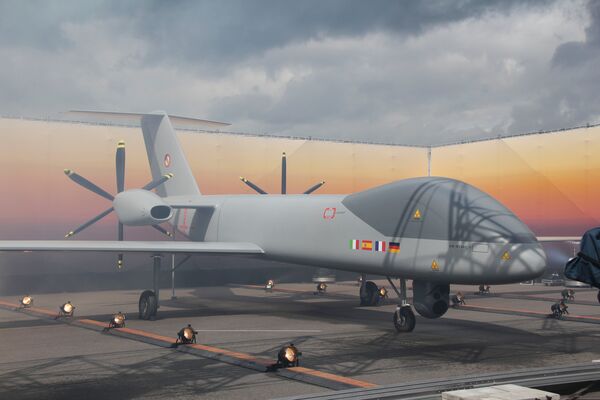 A full-sized mock-up revealed at the ILA Berlin Airshow in 2018 showed the unmanned aircraft to be slightly larger in size than the GA-ASI MQ-9 Reaper, with a twin pusher-propeller configuration. The model on display was shown with a single electro-optical/infrared sensor. Although intended primarily as an intelligence, surveillance, and reconnaissance vehicle, there will be an option for it to be armed. (Janes/Gareth Jennings)

The OCCAR-Executive Administration (EA) Director and senior representatives from prime contractor Airbus Defence and Space from Germany and Spain signed an agreement on 15 July to allow European Defence Industrial Development Programme (EDIDP) funding from the European Union to partially finance the project, which also includes Leonardo from Italy and Dassault from France.

“The EDF [European Defence Fund] provides the European defence industry with financial support during the research and development phase of new products and key technologies in areas selected at European level.” OCCAR said. “OCCAR's expertise as the programme management authority and the funds provided from the European Commission will significantly enhance European defence capabilities and are a strong signal of the unity of Europe's leading defence companies.”