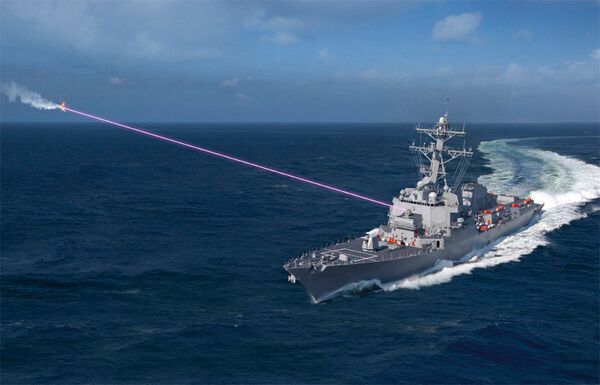 An artist's rendering of Lockheed Martin's HELIOS system: one of several first-generation HEL weapons being introduced by the US Navy into frontline service. (Lockheed Martin)

The US Navy is currently introducing a first generation of HEL weapons to frontline service. These include the AN/SEQ-4 Optical Dazzling Interdictor, Navy (ODIN), and the 60+ kW class MK 5 Mod 0 High Energy Laser with Integrated Optical-dazzler with Surveillance (HELIOS). Whereas ODIN is designed to dazzle or disrupt the sensors fitted to unmanned aerial systems (UASs), the higher power HELIOS is intended to defeat both small boat and UAS threats.

A critical aspect of HEL FCDA development has been optimising the interaction between the human operator and the machine, with the objective to build operator ‘trust' in the system. Sailors participated in a human performance experiment that used a simulated decision aid to collect data about the impacts on kill chain time, trust, neutralisation rate, usability and workload. The simulation – a machine learning (ML) algorithm – became the basis for the HEL FCDA human performance testing to predict the efficacy of the final product.

Engineers at the US Naval Surface Warfare Center Dahlgren Division (NSWCDD) have designed an artific...