The Forsvarsmateriell (FMA), the Norwegian Defence Materiel Agency, signed a contract with Norscrap West on 11 January to scrap the Fridtjof Nansen-class frigate KNM Helge Ingstad. The company will scrap the frigate at its facility at Hanøytangen by the end of the year, according to the FMA website. The agency valued the contract at approximately NOK60 million (nearly USD7 million), with sales of the metal recovered expected to reduce the cost by several million kroner. 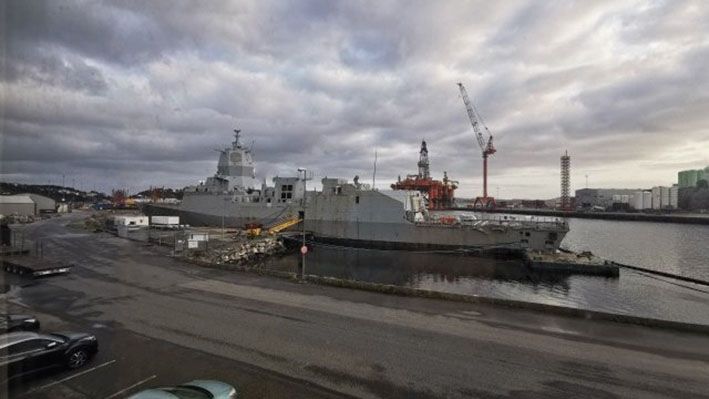 The FMA signed a contract with Norscrap West on 11 January to scrap the Fridtjof Nansen-class frigate KNM Helge Ingstad. (FMA)

The FMA said the vessel will be scrapped in Norway by a domestic company to protect the ship’s secrets, with agency technical experts overseeing the work in accordance with Norway’s Security Act.

Helge Ingstad was seriously damaged on 8 November 2018 after colliding with the tanker Sola TS in waters just outside Ågåtnes oil terminal in Hjeltefjorden, running aground and later sinking in shallow water, after which the frigate’s missiles and torpedoes were recovered.

The Norwegian Ministry of Defence told Janes on 15 January that sailing activity by the navy’s remaining frigates has been reduced this month as a follow-up to the findings of a draft report by the Accident Investigation Board Norway (AIBN) submitted on 14 December 2020. The ministry said the three frigates will not sail in January but did not expect this to have an immediate effect on operational capabilities. Two of the frigates, KNM Roald Amundsen and KNM Thor Heyerdahl, are undergoing planned scheduled maintenance this month and temporary measures have been implemented so the third, KNM Otto Sverdrup , can conduct a planned exercise with the UK Royal Navy.

The Forsvarsmateriell (FMA), the Norwegian Defence Materiel Agency, signed a contract with Norscrap ...