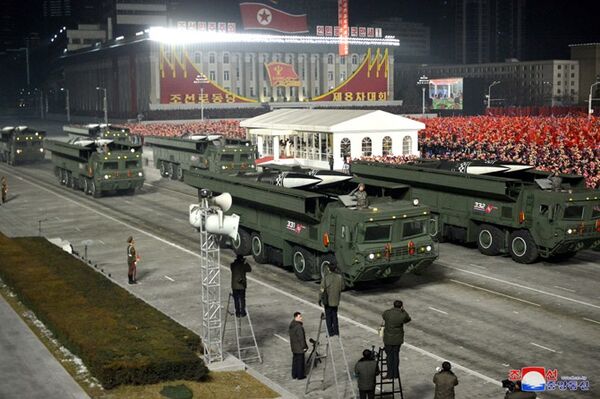 North Korean state-run media have yet to release images of the SRBMs launched on 15 September but the move comes after Pyongyang tested what appeared to be a KN-23 SRBM variant (seen here during an October 2020 military parade in Pyongyang) on 25 March. (KCNA)

The SRBMs, the exact type of which has yet to be revealed, were launched from the country's central Yangdok County in South Pyongan Province at 12.34 h and 12.39 h local time. The missiles flew a distance of about 800 km and reached a maximum altitude of 60 km, said South Korea's Joint Chiefs of Staff (JCS), adding that they are analysing the details of the launch along with US intelligence authorities.

The move, which comes only a few days after Pyongyang tested what it described as a new ‘strategic', long-range cruise missile, marked Pyongyang's second SRBM test since 25 March when it launched what appeared to be a variant of its KN-23 (US/South Korean designation) missile.

Tokyo said that the recently tested projectiles fell into waters outside Japan's exclusive economic zone. Japanese Prime Minister Yoshihide Suga condemned Pyongyang's latest missile launches as “outrageous”, arguing that they threaten the peace and security of Japan, as well as the region, and violate UN Security Council resolutions. Suga instructed his government to continue gathering information while ensuring the safety of air and maritime traffic.

North Korea launched what appeared to be two short-range ballistic missiles (SRBMs) into the East Se...