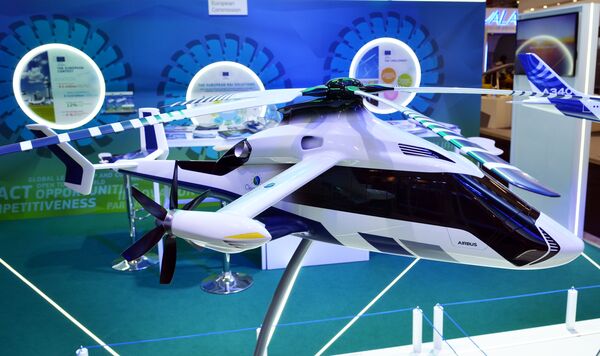 A model of the Airbus RACER concept, showcasing the pusher-propeller configuration that should enable it to achieve the high-speed flight required of the NGRC requirement. (Janes/Patrick Allen)

The high-speed requirements that NATO has set out for its Next Generation Rotorcraft Capability (NGRC) will necessitate the development of an unconventional rotorcraft design, a senior industry official has noted.

Speaking at Airbus Helicopters' Marignane facility in southern France, Matthieu Louvot, executive vice-president of Airbus Helicopters Programmes, said that the overriding objective of the NGRC to develop a new vertical-lift platform for the late 2030s is speed, and that this will preclude a conventional helicopter design.

“There is the NATO group called Next Generation Rotorcraft Capability discussing what should be the specifications for utility helicopters beyond 2035, and this group has put a strong emphasis on speed,” Louvot said on 18 May. “Speed is the defining factor, and what stands out, with implications for the aircraft architectures, is the request for a cruise speed of 220 kt, which basically says that it cannot be a conventional helicopter – it must be a different architecture.”

First reported by Janes in late 2020, the NGRC sees European NATO members France, Germany, Greece, Italy, and the United Kingdom (in the lead) developing a new medium-lift helicopter for the 2035–40 timeframe. Spain, the Netherlands, and the United States are observer countries.

The high-speed requirements that NATO has set out for its Next Generation Rotorcraft Capability (NGR...