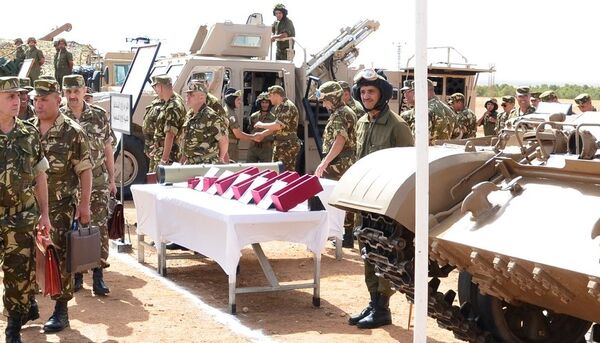 A new type 120 mm self-propelled mortar has entered service with the Algerian National People's Army (ANP), a photograph released by the country's Ministry of National Defense (MND) on 4 October confirmed.

The photograph was posted on the MND's Facebook channel to show a ceremony that was held by the 12th Mechanised Infantry Division, which is based in Djelfa, to mark the start of the 2022–23 training year.

Lined up behind a modified T-62 tank, it appeared to be mounted on a light armoured vehicle developed by the United Arab Emirates' (UAE's) Nimr company, which has licensed some of its designs for production in Algeria.

What appeared to be the same mortar mounted on a 6×6 Nimr Hafeet 640A was briefly seen in footage broadcast by China's CCTV-7 television channel on 6 January. Nimr says its Hafeet range has a gross vehicle weight of 15,000 kg.

Images of a very similar mortar have circulated on the internet that identify it as the CS/SM5A made by China's Norinco defence company .

The primary focus of the CCTV-7 package was a mortar mounted on a 6×6 Dongfeng EQ2101 that was tested against a conventional 120 mm mortar at a range in Northern Xinjiang. The new mortar was not named, but identified as a product of Linchuan Industry, the largest mortar development and manufacturing enterprise in China.

It appeared superficially different from the Norinco CS/SM4, mainly because it was fitted with shrouds around its loading and recoil mechanisms, although there were other minor differences.