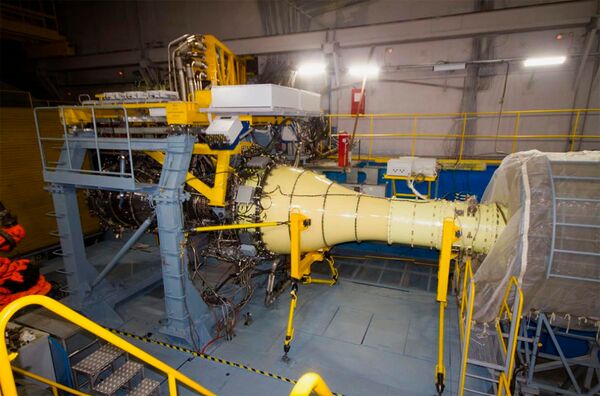 Early-stage static testing has begun on the engine core that will become the new Russian PD-35 turbofan aircraft engine. The engine is intended to have a thrust range of 24 to 40 tonnes (239 kN to 398 kN) and it has potential applications on Russia's future military transport aircraft fleet, as well as commercial aircraft programmes such as the CR929 and the Il-96-400. Original equipment manufacturer UEC-Aviadvigatel announced on 11 October 2021 that assembly of the gas-compressing core of the engine was completed in mid-September at a site near the Russian city of Perm and development had progressed to running the demonstrator at low power to confirm the integrity of the design.

According to United Engine Corporation (UEC) the PD-35 will feature eighteen significant new technological advancements, encompassing the use of additive manufacturing, lightweight materials, heat resistant coatings and digital design techniques. UEC mentioned that Russian companies are supplying several engine core components, highlighting the domestically developed nature of the engine. These components included the high-pressure compressor spool manufactured by UEC-UMPO, the casing of the high-pressure compressor from UEC-Aviadvigatel, the combustion chamber from UEC-Perm Motors, and the high-pressure turbine by UEC-Naro-Fominsk Machine-Building Plant (NFMZ). UEC also stated that the central drive was manufactured by UEC-Salyut and that the engine control software and hardware were produced by UEC-STAR and ABRIS. UEC said the next stage of demonstrator testing would occur at a Central Institute of Aviation Motors (CIAM) site near Moscow, though no timeframe was stated for the start of this activity.

Early-stage static testing has begun on the engine core that will become the new Russian PD-35 turbo...