Industry is bracing for surprise entries and team changes in the US Army’s up-gunning competition with at least one big switch up: Pratt Miller partnering up with Rafael Defence and Oshkosh Defence.

After a two-and-a-half-month deadline extension, all Medium Calibre Weapons System (MCWS) programme proposals and bid samples are due to the army on 24 August. Although many vendors are remaining tight lipped over whether they are still competing, Janes has confirmed with multiple, wholly separate, sources that Pratt Miller is no longer teaming up with CMI Defence and is now saddled up with Rafael and Oshkosh for its bid.

The service declined to comment on any team changes and said specific vendor information, including system performance and on-going participation, are considered “source selection sensitive”.

“The US [government] does not and has not provided vendor direction on who to partner with or what systems to utilise to protect the integrity of the competition,” Ashley John, director for public and congressional affairs for the Program Executive Office for Ground Combat Systems, told Janes on 12 August. “Each vendor partnership is independent of government input and has been developed directly from party to party.”

Under the competition, the army wants to select a team to outfit Stryker vehicles with 30 mm cannons. Service plans called for a two-phased, concurrent approach involving a design integration study phase to help inform requirements development and the acquisition strategy, and a separate Stryker MCWS request for proposal (RFP). 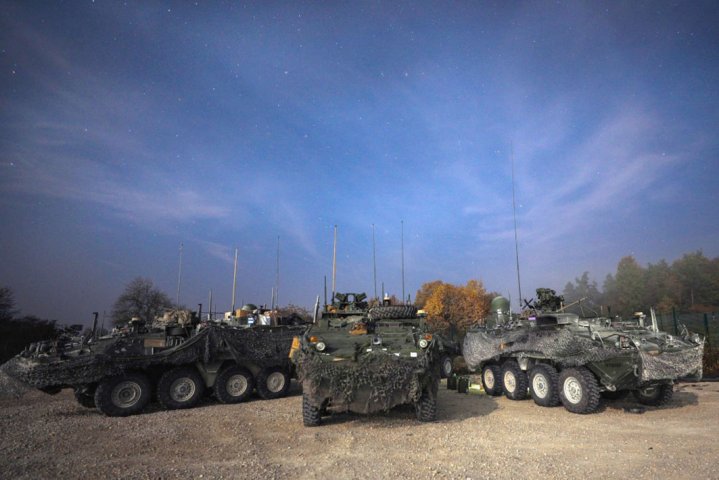 Stryker Infantry Carrier Vehicles make up the tactical action centre for the 2nd Cavalry Regiment during Dragoon Ready in Hohenfels, Germany, in 2018. Industry has until 24 August to deliver its MCWS proposals to the US Army. (US Army )