New launcher fitted to just one of the UAE's Ghannatha boats

The new launcher that was previously seen on one of the UAE Navy's Ghannatha fast troops transport boats has not been fitted to the other five yet, a video released by the state WAM news agency on 20 July showed. 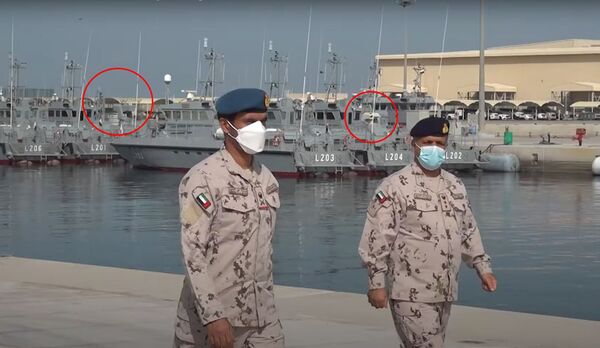 A still from the WAM video shows L205 fitted with a new launcher and EODS (circled left) and L204 fitted with a Hitrole-G (circled right). (WAM News Agency)

The UAE Navy originally ordered 12 Ghannathas, which were later modified by Abu Dhabi Shipbuilding. WAM reported in February 2015 that six had been armed with Patria's 120 mm NEMO automatic mortar and Leonardo's Hitrole-G weapon station with 12.7 mm machine guns. The other six were armed with Rheinmetall's 27 mm MLG 27 weapon station and a Hitrole-G while retaining the ability to embark 40 troops, it said.

One of the latter, L205, was seen fitted with a new launcher and a mast-mounted electro-optical (EO) system, but without a Hitrole-G, when it escorted visiting naval vessels to the IDEX defence show held in Abu Dhabi in February. The same type of 12-tube launcher was seen fitted to the UAE Navy's new landing ship Al-Saadiyat that was commissioned during the show.

The video released on 20 July showed senior officers visiting various military facilities for Eid al-Adha, including one that could be identified as the Ghantout Naval Base on Abu Dhabi's northern coast, where all six of the Ghannathas that were not armed with the NEMO could be seen moored.

Only L205 was seen with the new launcher, possibly indicating it was used as a testbed for a new weapon that will not be fitted to the others. Only L204 had the Hitrole-G fitted in the same position.

The new launcher that was previously seen on one of the UAE Navy's Ghannatha fast troops transport b...

The Ministry of National Defense (MND) in Seoul has said that it will further develop its military s...
Request Consultation