High-resolution photographs of China's latest submarine recently posted on social media forums appear to confirm that the boat is fitted with a reelable passive towed array sonar, which is a significant enhancement over the previous Type 039B (Yuan) class.

The submarine, which as previously reported by Janes has an unusually shaped fin similar to that on the Saab Kockums A26, was first photographed at the Wuchang shipyard in Wuhan in early May and subsequently at the Shenjia yard in Shanghai, where it had arrived by 20 June. 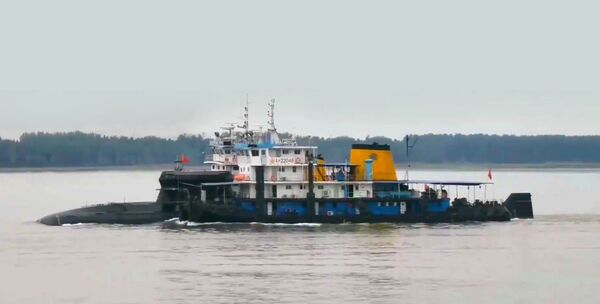 A composite image produced from multiple screengrabs taken from video footage posted on the TikTok social media platform around mid-June showing what appears to be a new conventionally powered submarine for the Chinese navy. The boat is fitted with a reelable passive towed array sonar. (Via TikTok/Janes)

The most recent photographs show clearly that, compared with the Type 039B, the length of the flat part of the submarine's casing, above the pressure hull, has been extended further aft and that the fixed segment above the upper rudder has been enlarged. These changes would facilitate the installation of a winch drum under the casing, together with a payout tube to dispense the array and tow cable through a bell mouth above the rudder.

This aperture above the rudder is clearly visible in some of the photographs, together with what appears to be a deployment drogue that would use hydrodynamic drag to stream the array. The size of the bell mouth suggests that a thin line array is installed, which would be consistent with a design where the array is wound around a relatively small drum under the casing.