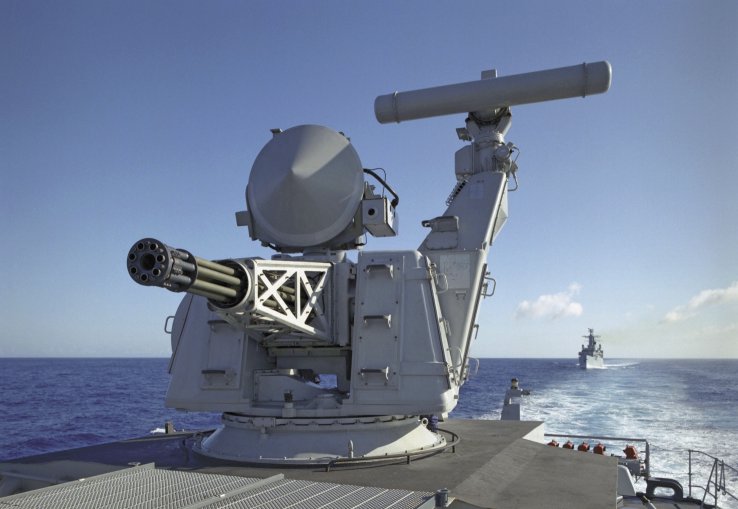 The Dutch Navy’s 16 Goalkeepers were recently subject to an upgrade to keep them relevant until at least 2025. (Royal Netherlands Navy)

In a 14 January letter to the Dutch parliament’s House of Representatives, State Secretary for Defence Barbara Visser said that plans were being taken forward to acquire the Raytheon/RAM-System GmbH RIM-116 Rolling Airframe Missile (RAM) guided weapon system and the Leonardo DART (Driven Ammunition Reduced Time of flight) 76 mm guided ammunition. The latter will be integrated with the Pharos fire-control radar developed by Thales Nederland.

Developed by what was Hollandse Signaalapparaten, now Thales Nederland, Goalkeeper is a fully autonomous CIWS combining a seven-barrel General Dynamics ATP GAU-8/A 30 mm gun with an I-band search radar and an I/K-band tracking radar. The system has recently been the subject of an upgrade under the Instandhouding Goalkeeper programme, designed to sustain Goalkeeper through to 2025. This has introduced a new electro-optical sensor package and video tracking processing unit, new prediction algorithms to improve fire-control effectiveness, and a new operator console.

However, with the Goalkeeper system now encountering obsolescence, the MoD’s Defence Material Organisation (DMO) in 2018 established the Vervanging (replacement) Close-in Weapon System project to identify options for a successor. According to the DMO, the replacement capability – costed at between EUR100–250 million (USD120–300 million) – is required to defeat stressing anti-ship cruise missile threats, other air targets, and surface threats, such as fast inshore attack craft.

The Netherlands Ministry of Defence (MoD) is to buy a combination of inner-layer missiles and medium...