NATO declared on 15 February that its fleet of five Alliance Ground Surveillance (AGS) remotely piloted aircraft systems achieved an initial operational capability, meaning that the RQ-4D platforms are now mission-ready. Whether they could eventually be deployed beyond NATO and international airspace, however, remains to be seen, said officials. 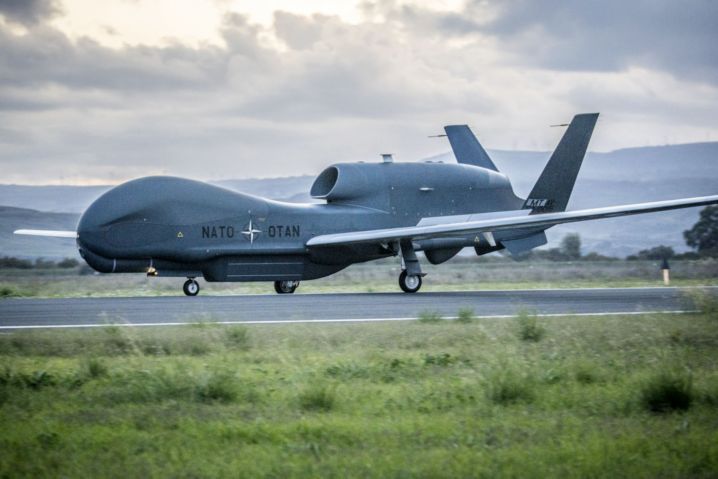 Calling it a “major milestone” for the AGS programme, General Tod Wolters, NATO’s Supreme Allied Commander Europe (SACEUR), said in a press release that the new capability “will substantially increase the alliance’s awareness, indications and warnings of what is happening around its borders”.

Based in Sigonella, Italy, the platforms were purchased by 15 NATO nations, but will generate intelligence, surveillance, and reconnaissance data for sharing among all 30 allies. AGS operates a modified version of Northrop Grumman’s Block 40 Global Hawk unmanned aerial vehicle.

Flying for up to 30 hours at a time, the air vehicles operate from high altitude – over 18,000 m – to enable their advanced radar sensors to map, detect and track moving objects on the ground across wide swathes of territory. They can map an area as large as Iceland in a single day, according to the NATO Communications and Information Agency, which oversees management of the AGS programme.

“Flying [the AGS platforms] along our borders provides us [with] very useful information,” NATO Secretary General Jens Stoltenberg told reporters during an online press conference on 15 February. “They can even spot IEDs [improvised explosive devices].”

Although the AGS fleet can monitor two different regions at the same time, NATO will have to prioritise, given the diversity of hotspots fringing the allies’ collective borders, said officials.