NATO has formally received the first of eight Airbus A330 Multi-Role Tanker Transport (MRTT) aircraft during a ceremony at the manufacturer’s Getafe integration and conversion facility near Madrid, Spain. 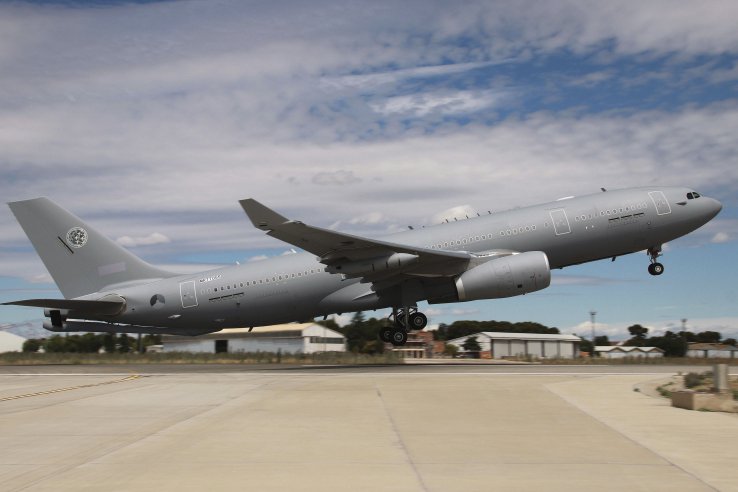 The first of eight A330 MRTT aircraft that NATO members Belgium, the Czech Republic, Germany, Luxembourg, the Netherlands, and Norway are to operate as a joint fleet under the MMF initiative was formally delivered on 29 June. (Airbus)

The milestone, announced on 29 June, saw MMF1 handed over as the first MRTT aircraft to be operated jointly as the Multinational Multi-Role Tanker and Transport Fleet (MMF) by NATO members Belgium, the Czech Republic, Germany, Luxembourg, the Netherlands, and Norway.

As noted by Airbus, this first aircraft will arrive at the MMF’s main operating base at Eindhoven in the Netherlands on 30 June. With MMF1 now in the hands of NATO, MMF2 is also ready for delivery in the coming weeks. As previously noted, MMF3 and MMF4 are currently undergoing military conversion at Getafe, and are due to be delivered in October and early 2021 respectively. MMF5, as of now a ‘green’ aircraft, arrived at Getafe from the Toulouse production plant earlier in May, with MMF6, 7, and 8 set to follow through the process to the final aircraft being handed over in 2024.

Managed by the NATO Support and Procurement Agency (NSPA) with support from the Organisation for Joint Armament Cooperation (OCCAR), the MMF capability will provide the six participating nations pooled access to aerial refuelling (hose-and-drogue and boom/receptacle) strategic passenger and cargo airlift, as well as aero-medical evacuation (medevac) capabilities.