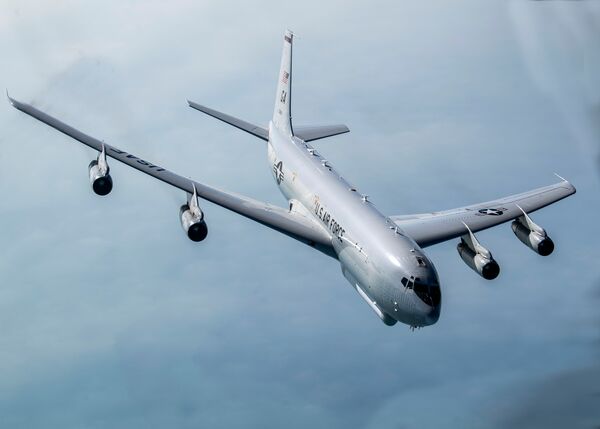 NATO aircraft, such as the US Air Force's E-8 JSTARS, have been operating over Ukraine for a few weeks, providing invaluable intelligence on Russia's buildup of forces. With President Putin closing down the country's airspace on 24 February, these assets will now have to operate in alliance and international airspace instead. (US Air Force)

NATO has lost its ability to conduct airborne intelligence, surveillance, and reconnaissance (ISR) overflights of Ukraine, with the closure of the country's airspace by Russia.

Just prior to Russian President Vladimir Putin announcing his intent to send forces into Ukraine beyond the current borders of the breakaway regions of Donetsk and Luhansk, Russia issued a decree closing airspace across the northeast of the country, while military action across much of the remainder of Ukraine has had the same effect. Immediately following the launch of Russian military action in the early hours of 24 February, online flight-tracking services recorded manned and unmanned NATO ISR aircraft departing Ukraine for alliance and international airspace.

For a few weeks prior to Russia's wider invasion of Ukraine, NATO member air forces and alliance assets flew unprecedented, and almost continuous, ISR flights over Ukraine itself, building a picture of the ramp-up of Russian forces on the country's borders.

The launch of renewed Russian military operations in Ukraine means that it is no longer safe for these and other unarmed ISR platforms to operate directly over the country, limiting their activity to alliance and international airspace close to Ukraine's borders. At the time of publication, a NATO Phoenix UAV, callsign FORTE12, was seen to be the last alliance aircraft to depart Ukrainian airspace to take up position over the Black Sea.

With Ukrainian airspace closed, Russia has launched its invasion of Ukraine with a series of cruise missile attacks on airfields, including on those located far from the country's eastern border area that has been the focus of tensions to date. Videos posted online showed a 3M-54 Kalibr (SS-N-27A ‘Sizzler’) cruise missile striking locations such as the Ivano-Frankivsk airport in the far west of Ukraine, just 100 km from the border with Slovakia. The intent of these strikes appears to be to ground the Ukrainian Air Force, and to establish Russian air dominance in support of its ground operations. Following these strikes it was reported that at least one Ukrainian Air Force Sukhoi Su-27 ‘Flanker' combat aircraft had flown to and landed in Romania.

In terms of the wider air campaign, the Ukrainian government reported at the time of publication that its forces had shot down five Russian aircraft and one helicopter, although Moscow denied this.