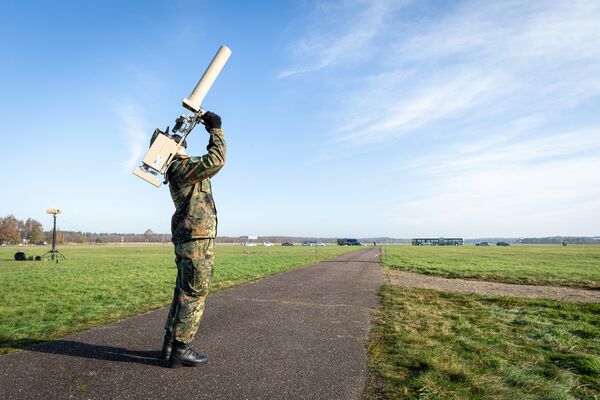 NATO is to analyse the results of its first fully-fledged technical exercise to locate, identify, and counter hostile unmanned aircraft systems (UASs) – particularly from swarm attacks.

The data will then be farmed out to industry, researchers, and other trusted stakeholders in early 2022 to address gaps in capability and command-and-control (C2) reactivity. Looking ahead, NATO also aims to nudge the allies toward a new common standard for interoperable tactical data exchange among their diverse C-UASs and components, according to allied officials.

Seventy technical systems and some 30 companies, national defence agencies, and NATO research and policy units were involved in the 2–12 November exercise, dubbed C-UAS Technical Interoperability Exercise 2021 (TIE21). TIE21's counter-drone activities were carried out at a Royal Netherlands Air Force (RNLAF) base near Venlo, and organised by the NATO Communications and Information Agency (NCIA).

A central objective for the NCIA was data-capture across TIE21's various radar units, jammers, radio direction finders, C2 systems, and effectors in order to finger problems such as bandwidth deficiency, excessive latency or false positives.

“Many companies are working on C-UAS capabilities with their own data protocols and in isolation from one another,” Rene Thaens, head of NCIA's electronic warfare and sensors branch, told reporters during a 10 November on-site press briefing. “There's hardly any communication between them for moving towards an interoperable data-exchange standard.”

NATO is to analyse the results of its first fully-fledged technical exercise to locate, identify, an...

An intergovernmental piracy watchdog has reported a rise in the number of sea robbery incidents in t...