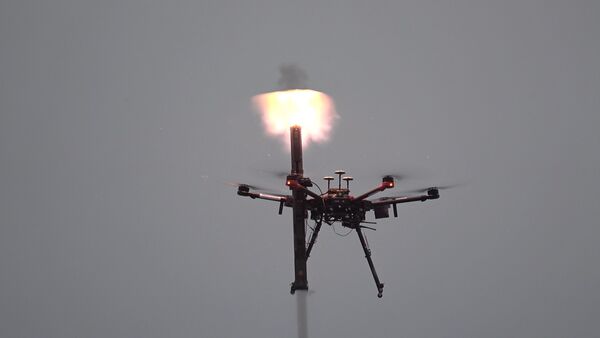 The ‘M72 Airborne' concept: an M72 ASM RC round is launched from DJI Matrice 600 hexacopter drone demonstrator during a live-fire demonstration trial in Norway. (Nammo Raufoss)

“With the M72 mounted on a drone, users can bring the weapon to the target in a way not previously possible. This opens up both a ‘top attack' option against more heavily armoured targets, even up to main battle tanks, while at the same time removing operators from the danger zone,” Quoc Bao Diep, vice-president, Large Caliber Systems at Nammo Raufoss, told Janes. The M72 variants designed to be used against armoured targets can penetrate at least 450 mm of steel.

Developed in-house by Nammo, with support from the Norwegian Defence Research Establishment, the M72 Airborne concept has completed a series of six live-fire demonstrations to various customers, including the Norwegian Army, using a DJI Matrice 600 hexacopter commercial drone demonstrator with the M72 anti-structure munition, reduced calibre (ASM RC) against lightly armoured vehicles. “All the firings were successful,” said Diep. “We have now demonstrated that the concept works, and development of the system is essentially finalised. The next step is to involve the customer, where they can select the drone they want to use with the system.”

Nammo Raufoss in Norway has finalised development of a unique low-cost loitering weapon concept that...