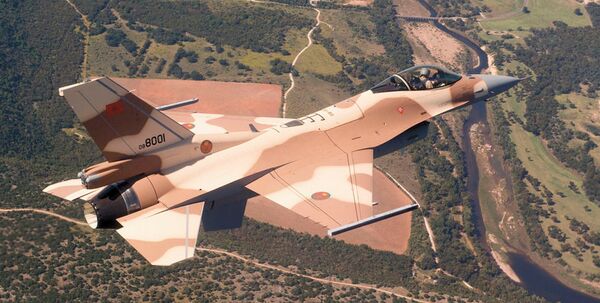 Morocco has been upgrading and modernising its military capabilities, including those fielded by its fleet of Lockheed Martin F-16 Fighting Falcon aircraft. (Lockheed Martin)

Morocco's draft 2022 budget was presented to the country's Finance and Economic Development Committee on 25 October, with the defence budget increasing by 4.77% on the 2021 defence budget.

Additional investment in the military from other sources is bringing the overall total defence expenditure to MAD63.04 billion, a 4.77% increase on 2021's budget. Overall spending is anticipated to be 17.62% of government expenditure in 2022, down from 18.15%.

Article 34 of Projet De Loi De Finances 76-21 Pour L'annee Budgetaire 2022 (Finance Bill 76-21 For Budget Year 2022) also increased the maximum ceiling for the procurement of equipment for the RMAF by 4.15% to MAD115.55 billion. The article noted that the increase in the ceiling budget was in anticipation of additional procurements in 2023. While the procurement authorisation is significantly higher than the defence budget, this facility is understood to have never been drawn to its maximum, and functions as an emergency ceiling in case of a sudden requirement for military expenditure.

Morocco's draft 2022 budget was presented to the country's Finance and Economic Development Committe...