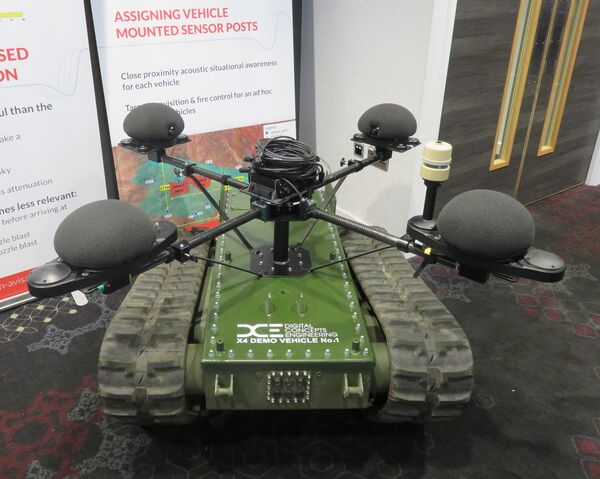 A Microflown Avisa Castle acoustic subarray mounted on an unmanned ground vehicle, displayed at the Omega Future Indirect Fires conference. The acoustic master is located in the centre and the meteorological station is mounted on a short mast next to the front right acoustic sensor. (Giles Ebbutt)

Microflown Avisa and Leonardo have developed new acoustic artillery detection technologies, briefing on these at the 2022 Omega Future Indirect Fires conference in Bristol.

Microflown Avisa has developed a new concept based on detecting the 3D shockwave (SW) generated by an artillery round – which originates at the tip of the shell along its trajectory – and the muzzle blast.

The company's Acoustic Multi-Mission Sensor (AMMS) detection system detects muzzle blast alone, and is based on micro-electromechanical systems (MEMS) and measures acoustic particle velocity. It consists of two orthogonally placed Microflown transducers and a microphone in a single hemispherical container.

Each AMMS provides the direction and elevation of the sound source; networked together these can provide accurate localisation. Earlier versions of the system have been used operationally and include both static networked sensor arrays and single vehicle or UAV-mounted sensors.

According to Microflown Avisa, the advantage of applying 3D SW detection is that it generates a continuous sound source rather than an instantaneous one; has a higher initial decibel level; faces less attenuation while travelling; and arrives at a sensor as a less disturbed signal since it is not affected by terrain conditions. The intention is to reconstruct the ballistic trajectory of the round to establish its point of origin.