MD Helicopters Inc (MDHI) has announced an improved Block II (2) variant of the MD 530G armed reconnaissance/light attack rotorcraft that it has developed in partnership with Elbit Systems of Israel.

The enhanced version of the ‘Little Bird’-variant helicopter, the existence of which was revealed by the company on 5 December, features advanced weapons and mission management capabilities. 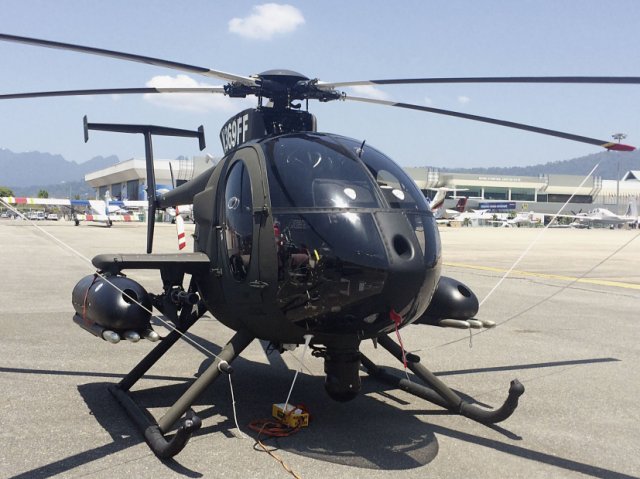 The MD 530G (pictured) that was launched in early 2014 has now been improved with the announcement of a Block II variant developed in partnership with Elbit Systems. (MD Helicopters)

As noted by MDHI, these systems come together in an improved human-machine interface (MHI) that includes touch-screen multifunctional display (MFD) units in, what the company terms, “a multimission cockpit”.

The HDTS allows for day and night operations, while the WMS allows the carriage of the Lockheed Martin AGM-114 Hellfire air-to-surface missile and/or the BAE Systems Advanced Precision-Kill Weapon System (APKWS). Interestingly, when the MD 530G Blk I was launched in January 2014, Jane’s was told by MDHI that the MD 530 could not carry the Hellfire due to weight constraints but that it would feature on the (since cancelled) MD 540A. It would appear that the company has now addressed this particular limitation.

The MMS features a digital mapping capability that is managed via a touchscreen MFD, as well as integrating directly with the electro-optical/infrared (EO/IR) sensor “to enable, detect, and store intelligence”, MDHI noted.