MBDA announced on 19 April it has been awarded a contract from Lockheed Martin to equip the Royal Canadian Navy’s (RCN’s) new single class of 15 Canadian Surface Combatant (CSC) multimission frigates with the Sea Ceptor air-defence weapon system. The specific date of the award and the contract value were not disclosed.

Lockheed Martin Canada is the team-lead and design authority for the development and integration of the combat management system (CMS) on the CSC vessels and, as such, awards contracts for associated sub-systems, including Sea Ceptor.

Configured with three different layers of anti-air warfare (AAW) defence, the new CSC will be fitted with a 32-cell strike length Mk 41 vertical launch system (VLS), which will house both the Raytheon Technologies medium-range active version Standard Missile-2 (SM-2) Block IIIC anti-air missile in the AAW role and the new Evolved SeaSparrow Missile Block 2 (ESSM Block 2) quad-packed weapon system in the point defence role. Block 2 replaces the legacy ESSM Block 1 guidance section with a dual-mode active/semi-active X-band radar seeker that increases the diameter of the missile front-end section to 10 inches. The introduction of an active seeker channel will support terminal engagement without the requirement for target illumination by the launch ship.

Utilising the Common Anti-air Modular Missile (CAMM) as its effector, Sea Ceptor will undertake the Close-In Air Defence System (CIADS) role on-board the new CSC frigates. The Sea Ceptor system with the CAMM effector was selected over the Raytheon Missiles & Defense SeaRAM ship defence system for the CSC CIADS capability. The CSC will also be fitted with the Kongsberg Defence & Aerospace Naval Strike Missile for an offensive anti-surface warfare capability. 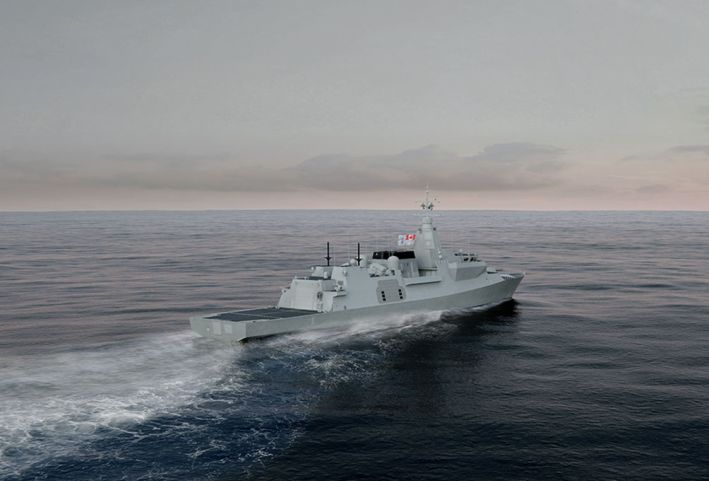 MBDA announced on 19 April it has been awarded a contract from Lockheed Martin to equip the Royal Ca...