Firefighters continue to battle a massive blaze that engulfed the US Navy’s Wasp-class amphibious warship USS Bonhomme Richard (LHD 6) as the vessel sat pier-side at Naval Base San Diego in California on 12 July, injuring 17 sailors and four civilians.

The vessel, the sixth Wasp-class ship in the navy fleet, was undergoing routine ship maintenance at the San Diego base when it burst into flames. Roughly 160 of the ship’s 1,000 crewmembers were aboard the vessel at the time of the fire. The injured sailors and civilians were all transported to local medical facilities and are all listed as being in stable condition, according to a 12 July statement from Naval Surface Forces, US Pacific Fleet. Additionally, 34 sailors and 23 civilians were also treated for minor injuries related to smoke inhalation and heat exhaustion tied to the fire, command officials said. 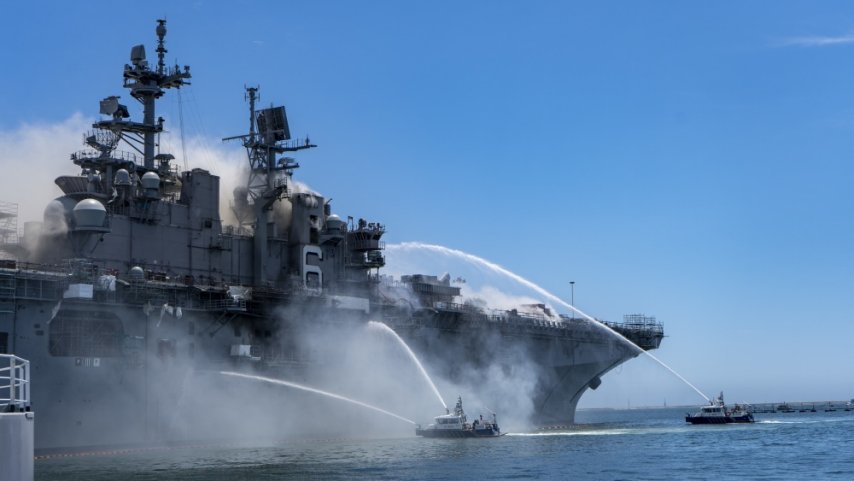 Port of San Diego Harbor Police Department boats combat a fire on board USS Bonhomme Richard (LHD 6) at Naval Base San Diego on 12 July. (US Navy)

All other crewmembers have been accounted for, Chief of Naval Operations Admiral Mike Gilday said in a 12 July statement. “We are grateful for the quick and immediate response of local, base, and shipboard firefighters aboard USS Bonhomme Richard . Our thoughts and prayers are with our. . . sailors, their families, and our emergency responders who continue to fight the fire. Godspeed,” he added. The cause of the fire is still under investigation.

Firefighters continue to battle a massive blaze that engulfed the US Navy’s Wasp-class amphibious wa...

The US Navy (USN) will be testing and reviewing the potential of added-missile capability on San Ant...

Although the US Marine Corps (USMC) will still use traditional relatively large amphibious-centric U...
Request Consultation