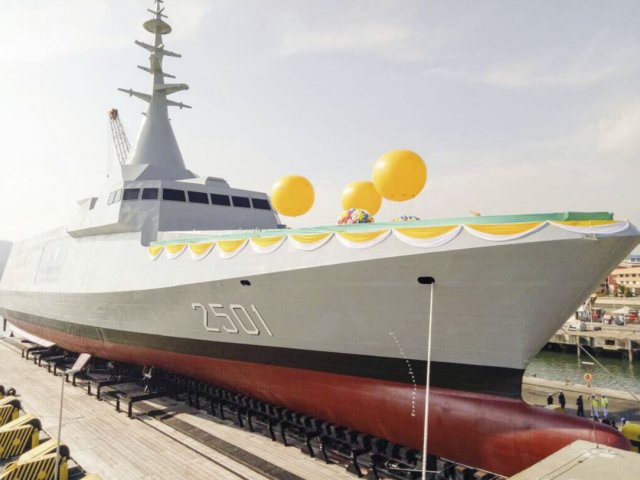 Malaysia’s Maharaja Lela (Gowind)-class littoral combat ship (LCS) programme is facing a cost overrun of about MYR1.4 billion (USD340 million), and the project will be delayed by several more years.

The matter was revealed by Malaysia’s Minister of Defence, Mohamad bin Sabu, in a reply to questions from parliament on 29 October. “The first ship is now delayed by 34 months, and this is a very long time”, said Mohamad, in a transcript of parliamentary proceedings retrieved from the Malaysian Hansard.

According to the minister, the LCS contract with Malaysia’s Boustead Naval Shipyard (BNS) came into force on 3 October 2013, and is effective until October 2023 with a stipulated spending limit of MYR9.1286 billion for all six ships.

However, as of 30 September 2019, the contract is only 55.7% complete, when it should be 78% complete, said Mohamad. “[BNS] has informed us that there will be a delay in the physical delivery of all six ships, and there are also additional costs of MYR1.4 billion,” he added.

“This is the problem we are facing, if we were to terminate this project. We have already paid MYR6 billion. If we want this to continue, we will have to allocate more funds,” said the minister, who assumed the defence portfolio in May 2018 after the previous government was defeated in shock election results.

“There are lots of problems faced in this project and if these were to be discussed in detail, there might be a loss in confidence in the capabilities of our local companies in Malaysia,” said Mohamad.