Russia's United Aircraft Corporation (UAC) unveiled its newest single-engine multirole combat aircraft, which it has dubbed ‘The Checkmate', at the MAKS 2021 international aerospace show held in Zhukovsky near Moscow from 20–25 July.

Developed by UAC subsidiary Sukhoi, the Checkmate is built on a stealthy fuselage with twin vertical stabilisers and features an internal weapon bay and an under-chin air intake. An optical sensor is mounted in front of the cockpit.

UAC did not detail the maximum take-off weight of the Checkmate, but said it has a 7,400 kg payload, can reach a speed of Mach 1.8, and has a combat range of 1,700 km without additional fuel tanks. Powered by a 14,500–16,000 kgf jet engine that is built on the technologies of Rostec's United Engine Corporation, the fighter is reportedly capable of manoeuvring at 8 g loads and sustained flying at supersonic speeds. 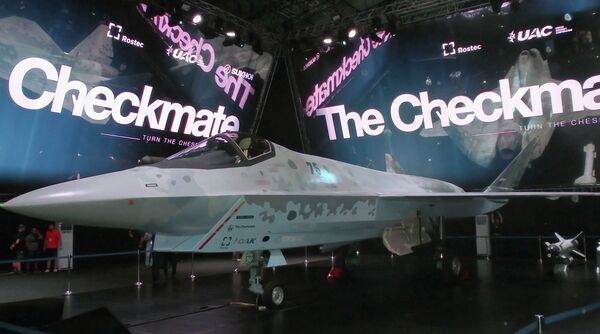