The Armed Forces of Madagascar (Tafika Malagasy) displayed their new light armoured vehicles during the 26 June military parade in Antananarivo that commemorated the 60 th anniversary of the country’s independence. 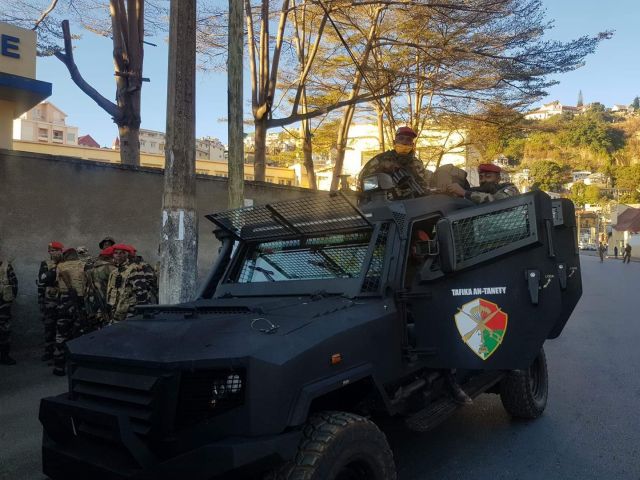 A Panthera T4 deployed in Antananarivo for Covid-19-related security duties in early July. (Ministry of Defence of Madagascar)

The Panthera T4 is a 4×4 vehicle built on a Toyota Land Cruiser series 79 chassis that has a fully armoured cabin housing a driver and three passengers, including a machine-gunner. It has a rear bed with seating for additional dismounts, who are protected by side-mounted armoured panels. This space can be used to transport cargo once the benches are removed.

According to MSPV, the vehicle’s armour offers CEN1063 BR7 or STANAG Level II protection. It can be powered by a 4.5 litre V8 diesel, 4.2 litre six-cylinder diesel, or 4 litre V6 petrol engines. It is not known which powerplant was chosen by Madagascar.

The T6 version of the Panthera series is in service with Cameroon’s Rapid Intervention Battalions and the Egyptian Army.

The vehicles had fully armoured cabins that appeared to have room for the driver and three passengers, with a protected weapon station fitted on top. They had unprotected rear beds with seats for four dismounts.

India’s Ministry of Defence (MoD) has approved the procurement of 156 additional licence-built BMP-2...

Kazakh vehicle manufacturer KPE announced on 13 May that it had signed a further agreement with the ...
Thank you for your inquiry, a Janes representative will be in contact with you shortly.