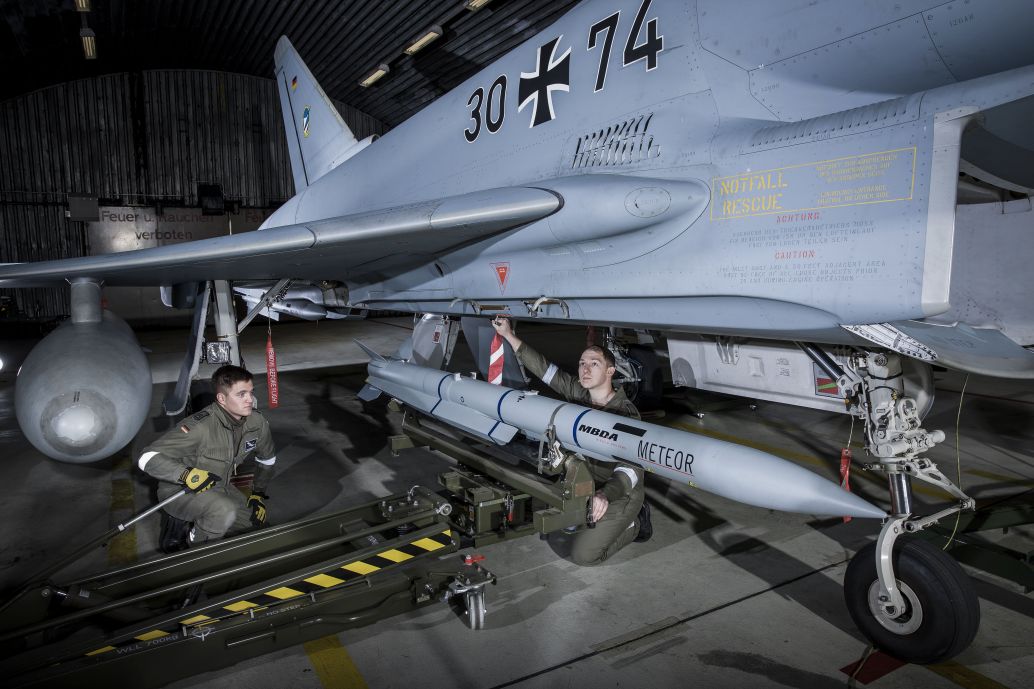 Luftwaffe ground crew load a Meteor BVRAAM aboard a Eurofighter combat aircraft. The service has now begun fielding the missile with the introduction of the P2Eb software on the aircraft. (MBDA)

The installation of the first Phase 2 Enhancements B (P2Eb) software aboard Luftwaffe Eurofighters means that for the first time the service is able to carry the Meteor BVRAAM for homeland air-defence and NATO air-policing duties.

“A new milestone in our Eurofighter fleet,” the Luftwaffe announced. “The new P2Eb software allows us to use Meteor. The update was made for the first time by TLG [Taktisches Luftwaffengeschwader: Tactical Air Force Wing] 74 [at Neuburg Air Base near Munich].”

With a published speed of more than Mach 4 and a range in excess of 100 km, the Meteor has been described by industry and military officials as providing a step-change in air-to-air combat capabilities. Whereas similar-type missiles have a relatively short boost-phase after launch, after which they glide to the target while bleeding energy, the Meteor’s ramjet means it is propelled up to the point of impact. This reduces the adversary aircraft’s chances of escaping the missile and gives the pilot more assurance of success when engaging enemy aircraft.

The German Air Force (Luftwaffe) has begun equipping its Eurofighter combat aircraft with the MBDA M...