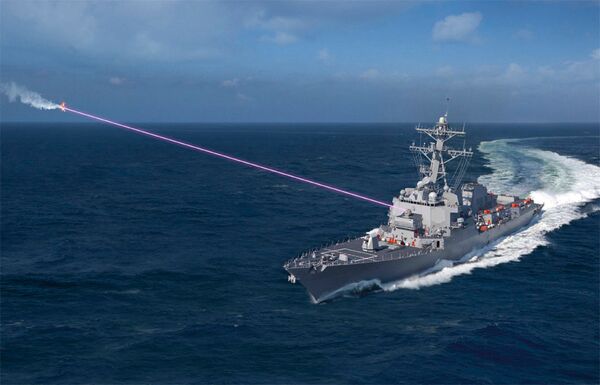 HELIOS is being installed on the guided-missile destroyer USS Preble . (Lockheed Martin)

As the US Navy (USN) and Lockheed Martin work through the installation of the company's High Energy Laser with Integrated Optical-dazzler and Surveillance (HELIOS) on guided-missile destroyer USS Preble (DDG 88), the service and the company are also working on integration and developing concepts of operations (CONOPS) for the new weapon system.

“What does integration mean,” Tyler Griffin, director of Lockheed Martin advanced product solutions strategy and business development, asked on 29 June during a roundtable update of the company's laser programmes.

“It's a question we are working on with the navy on how to efficiently train and develop CONOPS,” Griffin said.

The company and navy are working on how to optimise the new system, which is integrated with the Aegis Combat System, and works with other systems aboard the ship, he said. “That's the area we see us moving [towards] next.”

He spoke about where HELIOS could be developed, especially in the future. “The reason for those discussions is that this [HELIOS] is now the first [navy] tactically integrated laser weapon system,” he said.

Now the system has to be integrated into the tactical operational environment, which will happen when the ship goes to sea with HELIOS in fiscal year (FY) 2023, he noted.

HELIOS is being installed on Preble during an Aegis modernisation in San Diego, California.

As the US Navy (USN) and Lockheed Martin work through the installation of the company's High Energy ...