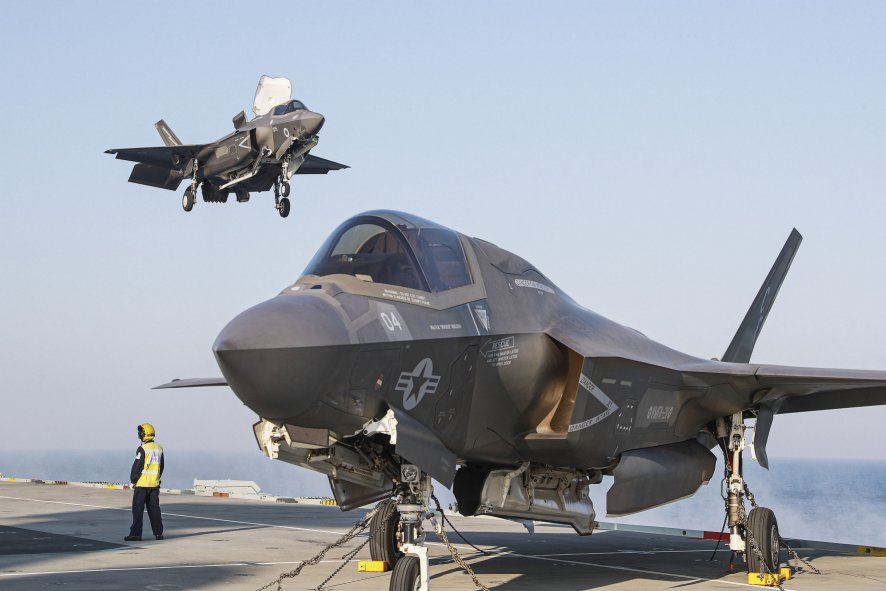 A US F-35B about to be joined by a UK aircraft on the deck of HMS Queen Elizabeth . Besides these two nations and Italy, other potential operators have expressed interest in the ‘pocket carrier’ capability that the STOVL jet could afford them. To this end, Lockheed Martin is to perform a series of ‘unique sea trials’ of the F-35 for non-DoD participants of the wider programme. (Crown Copyright)

The award, announced on 24 September, is part of a wider USD245.5 million developmental support contract for DoD and international operators of the F-35 that will run through to March 2022.

“[Additional to the wider developmental support work], this modification provides unique sea trials on aircraft carriers for non-DoD participants,” the contract notification stated. Though no further details pertaining to the aircraft carrier trials were disclosed, they are likely to relate to the short take-off and vertical landing (STOVL) F-35B variant of the aircraft.

To date, the US Marine Corps (USMC), United Kingdom Royal Navy (RN) and Royal Air Force (RAF), and Italian Navy (Marina Militare Italiana: MMI) have procured the F-35B to equip their respective amphibious assault ships and aircraft carriers, while current F-35A customers, Australia, Japan, Singapore, Spain, and South Korea, have all expressed interest in the STOVL jet’s carrier capabilities over recent years, as had Turkey before it was disbarred from the wider JSF programme.

Australia was reporting its interest in the F-35B for the Royal Australian Navy’s (RAN’s) two Canberra-class landing helicopter dock (LHD) amphibious assault ships as far back as 2014. The two 27,800-tonne LHDs – HMAS Canberra and HMAS