The Lithuanian Army presented its first batch of Joint Light Tactical Vehicles (JLTVs) at Rukla on 17 August, the Ministry of National Defence (MND) announced on its website later the same day. 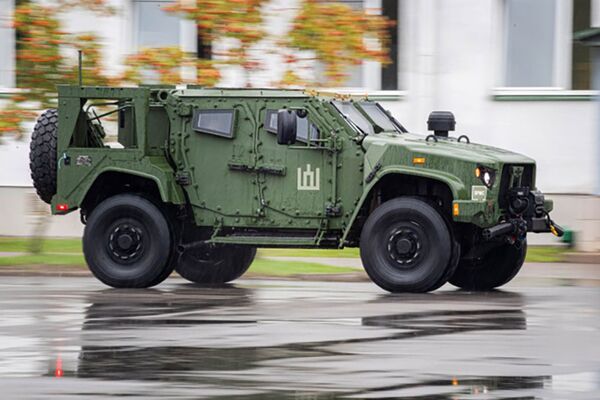 The Lithuanian Army presented its first batch of JLTVs on 17 August. (Lithuanian MND/Pliadis)

The Lithuanian MND said it had ordered a total of 200 JLTVs from the US government in 2019. The US Foreign Military Sale includes JLTV equipment, armaments, staff training, purchase and maintenance of spare parts, transportation, and installation of equipment, which along with the vehicles are scheduled to be delivered by 2024.

The first batch of 50 Lithuanian JLTVs was shipped from the United States to Lithuania via Germany. They were received by Lithuanian Armed Forces training units in Rukla and Kazlų Rūda, where dozens of JLTV drivers and 15 mechanics have been trained so far.

The MND said the JLTVs were delivered without turrets, which will be installed soon and be armed with M2 QCB (quick change barrel) 12.7 mm machine guns.

The JLTVs will be assigned to the Lithuanian ‘Iron Wolf' Mechanised Infantry Brigade and Žemaitija Brigade, with priority given to units assigned to the National Rapid Reaction Force.

Deputy Defence Minister Margiris Abukevičius said the acquisition was “one of the most important steps in the modernisation of the Lithuanian Armed Forces. They will provide better protection of our troops and improve intelligence, artillery, and air support operations. The [JLTVs] were manufactured according to Lithuanian Armed Forces requirements for both national defence and international missions [and will] also improve interoperability between Lithuanian and US forces”.

The Lithuanian Army presented its first batch of Joint Light Tactical Vehicles (JLTVs) at Rukla on 1...