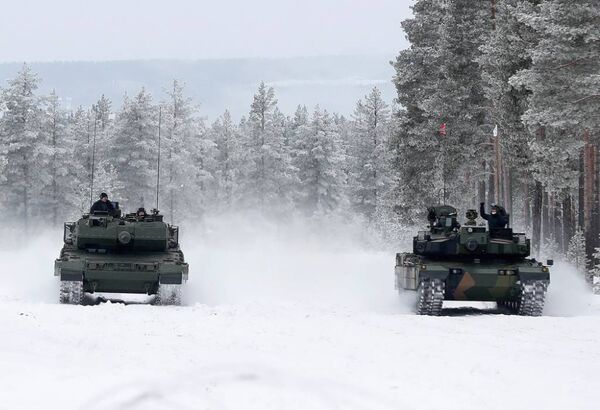 The NDMA announced on 28 January that winter trials for Norway's next MBT had begun at the Rena camp in Østerdalen, pitting the Leopard 2A7 against the K2. (Forsvaret)

The Norwegian Defence Materiel Agency (NDMA) announced on its website on 28 January that winter trials for Norway's next main battle tank (MBT) have begun at the Rena camp in Østerdalen. Krauss-Maffei Wegmann (KMW) is offering the Leopard 2A7 as Norway's next MBT, competing with Hyundai Rotem's K2 Black Panther.

The two companies have sent two tanks each to Norway for the trials for a new tank for the Norwegian Army, with a contract to be signed by the end of the year and deliveries planned from 2025. The tanks will undergo extensive mobility and firing tests for evaluation, but the NDMA does not plan to select a winner yet after the winter trials.

Norwegian Army chief Major-General Lars Lervik, who along with Defence Minister Odd Roger Enoksen inspected the tanks on 27 January, said Norway planned to replace its Leopard 2A4 with a digital tank, adding, “we will get the best possible tank at the best possible price”.

KMW and Hyundai submitted their offers at the end of 2021.

The chief of the NDMA's land systems division, Brigadier General Øyvind Kvalvik, said, “There are two good tank suppliers that are now competing to deliver tanks to Norway.”

The Norwegian Defence Materiel Agency (NDMA) announced on its website on 28 January that winter tria...