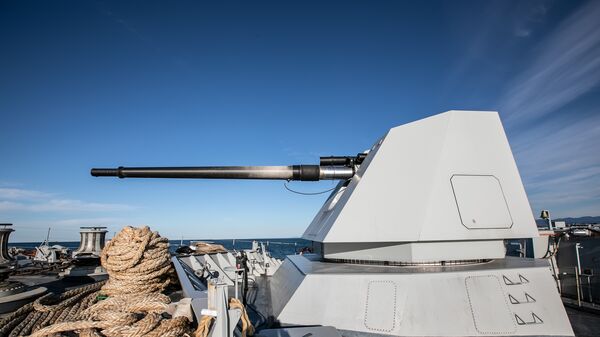 Leonardo has been awarded a contract by Damen to supply its OTO 127/64 LightWeight (LW) Vulcano medium-calibre naval gun for the German Navy's new Type 126 frigates.

Under the contract, announced on 29 March, Leonardo will initially supply gun systems to equip the four Type 126 frigates on order, with the addition of two optional vessels. The scope of supply also includes maintenance support, simulators for crew training, and onboard activities for the integration and commissioning of the system.

Dutch-owned Damen Shipyards was awarded a design and construction contract in June 2020 to deliver the four new Type 126 frigates for the German Navy in co-operation with German shipyards Blohm+Voss and Lürssen (the latter working in co-operation with Kiel-based German Naval Yards). French-based mission system specialist Thales will be responsible for the full integration and delivery of the mission and combat system.

The four ships will be built at Blohm+Voss shipyard in Hamburg, Lürssen‘s Peene-Werft yard in Wolgast, and at German Naval Yards in Kiel. Construction of the lead ship is set to start from around 2023. Deliveries are scheduled to take place from 2028 to 2031 (with an option for two more ships after 2032).

The 127/64 LW Vulcano gun will provide the Type 126 frigates with the ability to fire extended-range, precision-guided Vulcano munitions in both guided long-range and ballistic extended-range versions, and also conventional ammunition. According to Leonardo, the gun extends a naval unit's defensive capability up to 85 km while maintaining precision accuracy.

Leonardo has been awarded a contract by Damen to supply its OTO 127/64 LightWeight (LW) Vulcano medi...