Leonardo has demonstrated manned-unmanned teaming (MUM-T) between a helicopter and a tactical unmanned aerial vehicle (UAV) for the United Kingdom. 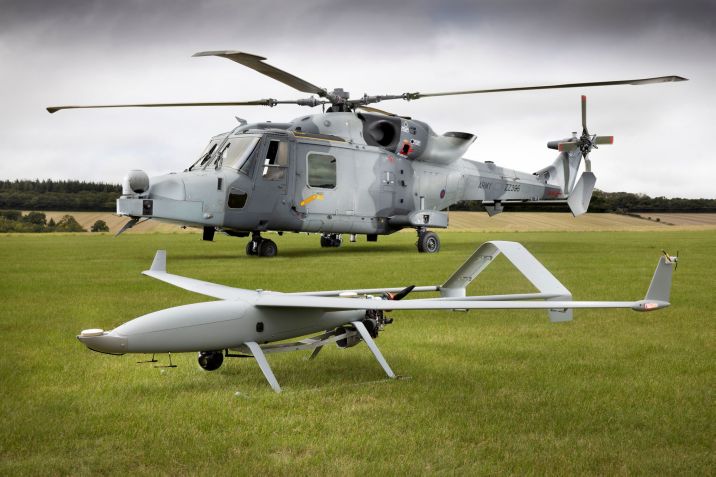 “In this instance, MUM-T is when a helicopter crew controls a UAV from the helicopter like it was an onboard sensor being controlled from the cockpit. By integrating control of the UAV into the Wildcat mission system, Leonardo was able to minimise the pilots’ workload allowing them to focus more on the mission whilst simultaneously controlling the UAV – this is the first time such an integrated capability has been demonstrated in the UK on a military aircraft. A ‘Gateway Processor’ supplied by Callen-Lenz Associates was used to interface with its semi-autonomous UAV,” Leonardo said.

According to Leonardo, its solution allows the Wildcat crew to control both the flight path and payload of the UAV (a capability known as Level of Interoperability [LOI] 4) using an efficient and effective task-based human-machine interface (HMI), rather than the more operator intensive approaches employed on other systems.

“These trials build on simulation-based development conducted under the Defence Science and Technology Laboratory (Dstl) funded Advanced Mission System Demonstrations and Experimentation to Realise Integrated System Concepts (AMS DE-RISC) programme. This successful demonstration is now expected to inform the MUM-T capability roadmap for both the UK Ministry of Defence (MoD) and Leonardo,” the company noted.

Leonardo has demonstrated manned-unmanned teaming (MUM-T) between a helicopter and a tactical unmann...

The UK Royal Air Force (RAF) is seeking a zero-emissions trainer aircraft as part of a wider nationa...
Request Consultation