Launcher set up at UK MoD Hebrides for GQM-163A firings

A US launcher asset dating from the late 1960s has been installed on the UK Ministry of Defence (MoD) Hebrides range off northwest Scotland ahead of the 10-nation ‘At Sea Demonstration/Formidable Shield 2021’ (‘ASD/FS21’) integrated air and missile defence exercise. 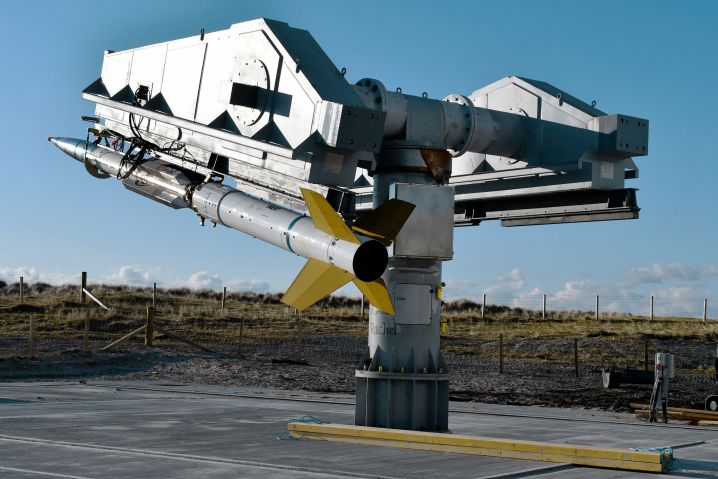 A modified AML 43K launcher has been installed at the MoD Hebrides Range for the upcoming ‘ASD/FS21’ exercise. The launcher will be used to launch the Northrop Grumman GQM-163A Coyote supersonic sea-skimming missile target. (US Navy)

‘ASD/FS21’, which runs from 15 May to 3 June at the Hebrides Range on Scotland's Atlantic coast and at Andøya Space Defence off Norway’s coast, is an interactive exercise in which military forces are challenged with numerous targets and threats at sea and work together to defend against air and missile attacks. Led by the US Navy’s 6th Fleet and conducted by Naval Striking and Support Forces NATO, the exercise is designed to improve allied interoperability in a joint live-fire, integrated air and missile defence environment using NATO command-and-control reporting structures.

NSWC PHD, which has supported the ‘ASD/FS’ series since 2015, is contributing five targets to this year’s exercise, comprising one Pathfinder Zombie ballistic missile target, two T4-B short-range ballistic missile targets, and two GQM-163A Coyote supersonic targets. Although T4-Bs have flown from the MoD Hebrides Range in the past, the GQM-163 Coyote and the Pathfinder Zombie targets are new to the range for ‘ASD/FS21’.

A US launcher asset dating from the late 1960s has been installed on the UK Ministry of Defence (MoD...

The deployment of advanced military capabilities across the Eastern Mediterranean requires new and b...
Request Consultation