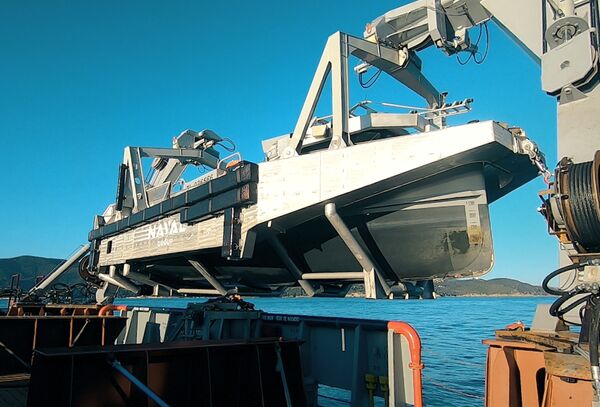 The Inspector 125 USV in the LARS onboard VN Rebel. (Belgium Naval & Robotics)

The launch and recovery system (LARS) developed for the Belgium/Netherlands (BE/NL) replacement mine countermeasures (rMCM) programme has completed live testing with an Inspector 125 unmanned surface vehicle (USV) in the Mediterranean.

Belgium Naval & Robotics – a consortium of Naval Group and ECA Group – said the 13 January trials demonstrated “relevance and reliability in real conditions”. LARS testing from the chartered offshore support vessel VN Rebel was witnessed from representatives of both the Belgian and Netherlands navies.

Belgium Naval & Robotics was contracted in May 2019 by Belgian Defense Forces for the delivery of a next-generation stand-off BE/NL rMCM capability based on mother ships employing a ‘toolbox' of offboard MCM systems. The 10-year contract, valued at almost EUR2 billion (USD2.27 billion), covers the supply of 12 2,700-tonne displacement mother ship vessels (six for each navy) plus MCM toolboxes based on unmanned/autonomous systems drawn from ECA's own UMIS offboard MCM suite.

The lead mother ship is scheduled for delivery to the Belgian Navy in 2024, with production of follow-on vessels extending through to 2030. Kership is taking responsibility for detailed design and subsequent construction of the 12 steel-hulled vessels at the Piriou shipyard in Concarneau, Brittany; the lead ship was laid down on 30 November 2021.

Each vessel will be fitted with two LARS systems installed port and starboard slightly aft of midships, close to the ship's centre of gravity, for the deployment and recovery of the Inspector 125 USV. The LARS assembly consists of two automated arms that deploy and recover a floating dock ‘cradle' over the side.

According to Belgium Naval & Robotics, the recent tests on VN Rebel